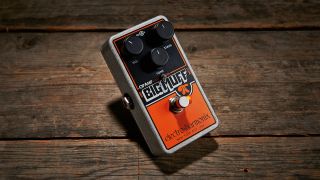 Since Keith Richards plugged into a Maestro Fuzz Tone back in 1962, fuzz pedals have evolved to become one of the most varied types available. With so much choice, it can be difficult to pinpoint exactly the right option for you. That will soon change once you’ve read our guide to the very best fuzz pedals for guitarists.

The fuzz pedal movement not only spawned octave-fuzz effects like the Octavia (think Hendrix’s Purple Haze), but also the high-gain, scooped grind of Electro-Harmonix’s snigger-inducing Big Muff, as heard on just about every distorted guitar track on Smashing Pumpkins’ masterpiece Siamese Dream.

What all fuzzes have in common is a lower clipping threshold than a distortion pedal, resulting in an almost totally square wave. That’s why some fuzzes sound almost like a synth at times.

The key differentiator between fuzz sounds lies in the transistors used: vintage-voiced fuzzes such as the Fuzz Face use germanium transistors, producing a warm, mid-gain sound. Raunchier fuzzes, like the Big Muff, tend to employ silicon transistors, which produce a harsher, more compressed tone.

Because fuzz circuits are relatively simple, pedal builders will often employ a host of other tweaks, from multiple modes to noise gates and beyond – just listen to Matt Bellamy’s use of a Z.Vex Fuzz Factory on Muse’s Plug In Baby to hear how far this effect has come.

Here, we’ve rounded up some of the very best fuzz pedals for guitarists, which run the gamut of tonal options. Any of these options would make a great addition to your pedalboard. Let’s get fuzzed up…

Looking for a great deal on a new fuzz pedal? With Black Friday incoming, now is the perfect time to be looking for great Black Friday guitars deals. We'll be sharing the very best offers on MusicRadar throughout the event.

The best fuzz pedal for classic tones in a small package

This nano-sized pedal sports the usual Big Muff triumvirate of Volume, Tone and Sustain knobs, but also includes a switch that bypasses the Tone knob. Compared with what you might get from a typical transistor-based Big Muff, there’s a little more coarseness to the sound, an underlying grainy crunch that lends itself to grungy riffing and thick ’n’ heavy chord work. In between the extremes there are sweet spots where you use the tone knob to dial in the right amount of edgy presence, or instead go straight to a no-nonsense sound that cuts through the mix by flicking the Tone Bypass. Those specifically seeking the famous Smashing Pumpkins tone will find it here, in a reasonably priced compact pedal from the original manufacturer. Even if that's not your bag, you will find a solid source of edgy fuzzy distortion that lends itself to all manner of heaviness. Not only is the Big Muff a real pedalboard essential, but it's one of the best cheap fuzz pedals for smaller budgets too.

The madcap boutique fuzz that produces all manner of tones

After the obvious classics born in the ’60s and ’70s, it's fair to say that the Fuzz Factory is the most well-known and celebrated modern fuzz pedal. What you get here is a five-knob fuzz that uses two new old-stock ’60s germanium transistors but offers manipulation of the circuitry like no other. The result is a pedal that needs careful juxtaposition of its knobs to get to the sounds you want, with squeals, howls and feedback along the way while you are getting them – that said, this is a fantastic fuzz pedal for sonic adventurers. Beyond that, the Fuzz Factory can deliver conventional harmonically rich fuzz, cool resonant droning feedback that you can tune to pitch, and gated staccato madness. Yes, it can be a beast that needs taming, but it offers probably the widest variety of fuzz-derived sounds in a single stompbox.

The Fuzz Face is one of the most iconic guitar effects pedals of all time, and its enclosure - inspired by the base of a mic stand - has barely changed since its introduction in 1966. The FFM3 Jimi Hendrix is a miniature version of the original JHF1. Circuit-wise, the FFM3 Jimi Hendrix has the same internals as the full-size version, including matched BC108 silicon transistors, designed to cover a range of Jimi fuzz tones, plus a modern, compact printed circuit board. In terms of tone, most noticeably the FFM3 serves up a stern kick in the mid-range. Not only does this provide better note clarity than rival Fuzz Faces, but it also makes the FFM3 a fine choice for boosting an overdriven amp, not to mention slicing through a mix. If you switch to your neck pickup it’s possible to unearth some tasty octave overtones, too.

The Scuzz Box fuzz pedal offers two very different modes, Fuzz and Scuzz. Fuzz is much like any germanium fuzz (think Hendrix-era Fuzz Face), giving great dynamic tones that clean up nicely with your guitar's volume, while the tone and deep knobs act more as high- and low-cuts. Where this pedal really comes into its own is when you switch to the Scuzz setting. This produces a gated velcro fuzz tone with a hint of octave/bit-crushed effects but, unlike more extreme fuzz pedals, it never becomes thin and grating in the top-end. What’s more the pedal features a buffer switch that comes in super handy for reducing interference when using long cables or multiple other pedals.

The Wampler Velvet Fuzz isn’t just a basic three-knob fuzzbox. Out front you’ll also find a Big/Tight switch to change the pedal’s voicing to suit your needs. Pedal creator Brian Wampler based this model on what he describes as the 'aggressive yet smooth' sound of a vintage fuzz driving a Marshall stack. This is most prominent on the Big setting, offering plenty of bottom end and fat, squelchy compression on your fuzzed-out notes. Switch over to Tight mode and you’ll still enjoy bags of fuzz, but in a leaner form and with a tighter bottom end. It’s more distortion than out-and-out fuzz and you’ll be able to dial in anything from Jack White riffage to smooth Gilmour leads on this setting.

The Fur Coat is one of the best fuzz pedals for guitarists seeking versatility thanks to its coupling of a standard fuzz pedal with a footswitchable octave that can be blended with the fuzz in adjustable amounts. With the EQ set fairly neutral, the fuzz is typically vintage-sounding; fat and warm with plenty of bottom end. The EQ knob covers a massive range in a similar style to a Big Muff, so can take that fuzz all the way from woolly to razor-sharp. Switch in the octave and things change dramatically. At its minimum setting the octave adds a small degree of tonal shift, increasing the presence slightly. That shift becomes more pronounced as you crank the octave until a distinct second tone, an octave up, makes itself more apparent. It’s a lovely octave fuzz sound, especially at higher levels of fuzz where single sustained notes take off into feedback and the upper note sings out.

Looking to create a unique fuzz tone? The Pelt is bloomin’ marvelous

In addition to the standard fuzzbox controls of Fuzz, Output Level and Tone, the Pelt offers a ‘Bloom’ knob and a pair of toggle switches to help players shape its silicon-based fuzz. The Mid switch offers either a slightly scooped midrange cut or adds a mid hump for a touch more honk, while Thick fattens up the bottom-end. Combine those with the Tone knob that rolls back from an edgy top-end to a more woolly vibe, and you’ve got a considerable tonal range to work with. The range of dirt on offer is quite wide, too. You’ll be able to produce everything from drive/distortion at the lower levels of the Fuzz knob, right through to unmistakable, full-on sustaining fuzz. The ‘Bloom’ knob is the most unique aspect of The Pelt, helping you shape its textural character. As you turn it from ‘Soft’ to ‘Hard’ you’ll experience an increase in note attack and a spongier feel under your fingertips, plus greater sustain and harmonics.

The Colby Fuzz is the result of a collaboration between EarthQuaker Devices and Colby Amps. A little history: Park was Jim Marshall's alternative company back in the ‘60s and the original Park Fuzz Sound was a branded version of a Tone Bender. This new iteration takes that design, complete with matched NOS Germanium transistors, and packages it in a more practically sized fuzz pedal with extra gain and tone control range, plus all of the expected modern facilities, including standard nine-volt power, true bypass, and so on. What you get from this stompbox is a great-sounding late-60s fuzz that's surprisingly versatile in its range - thanks mainly to the tone control, which offers buzzy, ripped-Velcro rasp when cranked to the left, and low-end warmth for fat vocal leads that'll sustain forever, when shifted to the right. We like it best with the fuzz maxed and controlled with the guitar volume knob.

Like its siblings, the Gunshot and Warthog overdrives, the Fallout Cloud is a four-knob pedal that's seated very robustly in a laser-etched stainless steel enclosure with side guards protecting your current knob settings from accidental realignment in your gig bag or on stage. The controls take in volume, bass, treble and sustain. A common gripe levelled at pedals that live in the grimy space between fuzz and distortion is that the grungy, bass-rich compression associated with them gets a bit messy and muddy when you're trying to articulate chords. To combat this, the Fallout Cloud gives guitarists greater control over EQ. In addition, the audiophile-grade quality of the components adds extra harmonic detail and clarity, especially at the more extreme settings. The pedal produces a familiar fat-but-cutting fuzz/distortion sound, but that classic cutting edge of sawblade mids and fried treble is more structured and overdrive-like.

Overdrive and fuzz in one pedal? This multi-function fuzzbox is the bee's knees

The Royal Jelly fuzz pedal is a collaboration with Howard Davis, a circuit designer known for his work with Electro-Harmonix in its hugely creative 1976 to ’81 period. The pedal offers overdrive and fuzz in parallel, but rather than delivering that with separately footswitchable fuzz and overdrives side by side, it presents them as two adjustable preset blends that you can switch between. This means you not only have a massive range of hybrid overdrive/fuzz sounds on offer, but you can also have separate overdrive and fuzz by setting each blend to be totally overdrive or totally fuzz. Add in Low and High EQ and a knob to blend in your dry guitar sound, and there’s quite a sonic landscape to explore. This pedal takes an individual, perhaps unusual, approach to the double-dirt pedal genre, but it can work really well, offering the ability to instantly switch between two hugely or subtly different sounds. With three combinable elements (overdrive, fuzz, dry) to sculpt those sounds, it’s a very versatile tone resource.