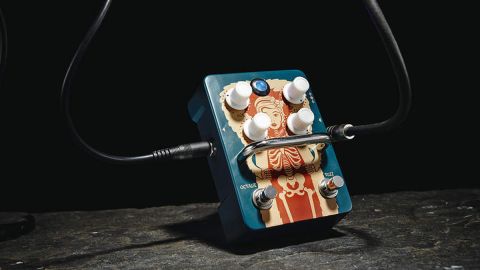 This is one for both the traditionalist and for the more experimental player.

There are many sartorial styles from the 1970s that are best forgotten but one we retain some affection for here is the fuzzy felt coating of US-made Foxx pedals such as the Tone Machine octave fuzz.

Sadly (or more probably, thankfully), Orange hasn’t gone quite so far as to implement a fabric finish for their latest pedal, but it has named it the Fur Coat in tribute to the Tone Machine on which it is loosely based.

Orange designer, Adrian Emsley, has taken that octave fuzz concept and brought it into a practical package for the modern guitarist by coupling a standard fuzz with a footswitchable octave that can be blended with the fuzz in adjustable amounts for a varied range of sounds.

With the EQ set fairly neutral, the fuzz here is typical vintage-style, fat and warm with plenty of bottom end. But there’s also loads of variation on a theme as the EQ knob covers a massive range in a similar style to a Big Muff, so can take that fuzz from woolly to razor-sharp. Switch in the octave and things change.

For a start, perhaps as a nod to Mr H’s most well-known use of octave fuzz, the LED turns from blue to purple - the rest of it is down to the amount of octave you add in.

At its minimum setting the octave adds a small degree of tonal shift, basically a slight increase in presence. That shift becomes more pronounced as you up the octave amount until a distinct second tone, an octave up, makes itself more apparent. It’s a lovely octave fuzz sound, especially so at higher levels of fuzz where single sustained notes take can off into feedback and that upper note sings out.

It’s not all about wailing solos though: keep the fuzz level lower down, dial in some EQ and get set for some taut power chords and gnarly riffing where the added octave ensures your sound cuts straight through the mix.

This is one for both the traditionalist and for the more experimental player. If you are into Hendrix and other classic rock sounds of the late 60s/early 70s there are certain familiar tones on tap, while for anyone looking for a more extreme noise experience there’s plenty of snot-nosed, up-yours, abrasive tones to explore.