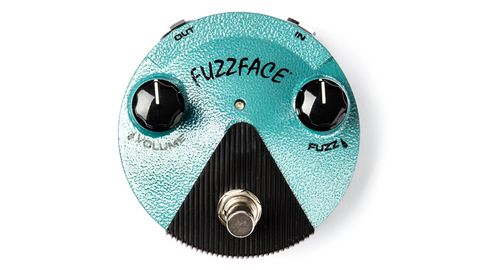 The most versatile, mix-friendly of the Fuzz Face Minis.

The Fuzz Face is one of the most iconic pedals of all time, and its enclosure - inspired by the base of a mic stand - has hardly changed since its introduction in 1966. But wouldn’t it be great if you could actually fit one on your pedalboard?

Fortunately, 2013 is the year the gnarly, nasty fuzz gets cute, with the introduction of three Fuzz Face Minis: the FFM1 Silicon, FFM2 Germanium and FFM3 Jimi Hendrix.

What these three have in common are modern-day appointments such as AC power jacks, bright blue status LEDs, easy-access battery doors and true bypass switching. And while the enclosures may be small, they’re just as sturdy as ever.

Circuit-wise, the FFM3 Jimi Hendrix features the same circuit as the full-sized JHF1, which features matched BC108 silicon transistors, designed to cover a range of Jimi fuzz tones, and uses a modern, compact printed circuit board approach for its construction.

The most noticeable sonic trait of the FFM3 Jimi Hendrix is a stern kick in the midrange. Not only does this provide better note clarity than its rival Fuzz Faces, but it also makes the FFM3 a fine choice for boosting an overdriven amp, not to mention slicing through a mix. You can unearth some tasty octave overtones with a neck pickup, too.