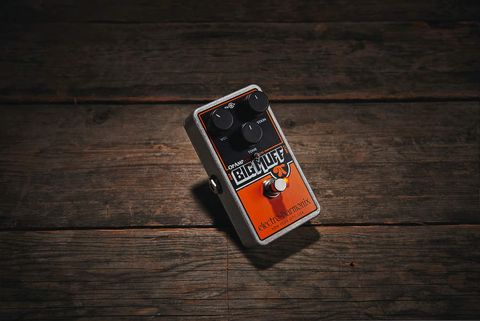 Those after that particular Smashing Pumpkins experience will find it here, in a reasonably priced compact pedal from the original manufacturer.

Another Big Muff Pi from Electro- Harmonix? Well, why not? It’s the company’s pedal after all, and it can’t let those boutique companies who offer their clones have all the fun.

And that’s what this pedal is about. This is one variant that EHX has so far passed by for reissue, but it is one that has spawned many clones due to its difference from normal transistor-based Big Muffs and its association with one particular band.

In 1978, EHX briefly switched the design of its Big Muff Pi from its traditional four-transistor circuitry over to a design based around the more cost-effective op amps (integrated circuits) and with one less gain stage. This particular model, known as the IC (or ‘Version 4’ to Muff aficionados) didn’t last long with only a few thousand made and production soon passing back to transistor circuitry.

Now, that version may have remained in obscurity were it not for the fact it was used by Billy Corgan on the Smashing Pumpkins’ Siamese Dream album. This created a demand for the vintage pedal that, in recent years, has been met by various boutique versions, something that doubtlessly influenced the original manufacturer to get busy...

The nano-sized pedal sports the usual Big Muff triumvirate of Volume, Tone and Sustain knobs but also includes a switch that bypasses the Tone knob. It delivers that typical Big Muff Pi combination of fuzz and distortion, but the devil is in the detail here. Compared with what you might get from a typical transistor-based Big Muff, there’s a little more coarseness to the sound, an underlying grainy crunch that lends itself to grungy riffing and thick ’n’ heavy chordal work.

This is, of course, is tempered by the tone knob, which at the clockwise extreme gets a little too thin and nasty while being a little woolly at the other. In between, though, are the sweet spots where you can dial in the right amount of edgy presence or instead go straight to a no-nonsense sound that cuts through the mix by flicking that Tone Bypass.

Those after that particular Smashing Pumpkins experience will find it here, in a reasonably priced compact pedal from the original manufacturer. Anyone else who gives this pedal a roll will find a solid source of edgy fuzzy distortion that lends itself to all manner of heaviness.