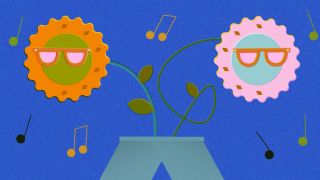 To re-appropriate a famous line about soccer, MusicRadar contends that at a time like this it's actually music that's the most important of the least important things in life.

How you can help support musicians in the wake of Coronavirus

With the live scene on viral ice, many musicians have seen their livelihoods evaporate overnight. So, if you're able, now is a great time to support your favourite artists in other ways.

Today, 20 March, Bandcamp, an online platform for direct sales including vinyl and merch, is waiving its own revenue share for 24 hours, meaning anything you buy puts money straight into artists' pockets.

Here, we've selected a few highlights from the Bandcamp universe, but this can only be a starting point.

Dive in, explore and - if you can afford to - support music.

Chelsea Wolfe, her band and crew recently had to return from Europe before their tour even started due to the closure of venues with the COVID-19.

Her semi-acoustic showcase of new album Birth Of Violence would have been a must-see show, but the album itself provides an engrossingly melancholic listen until she comes around again.

Ollie Wride - Thanks in Advance

The vocalist with synthwave / retrowave favourites FM-84 broke out with his solo release Thanks In Advance last year and it finds Brighton songwriter Wride expanding his scope while still celebrating a love for '80s synth-pop sounds.

If you’ve been missing the sounds of pop’s greatest decade then Back To Life, The Driver and I’m A Believer will be a real treat.

Another sumptuous blend of delicacy and dancefloor moments from Keiren Hebden, who sticks fairly closely to his tried and tested formula on his tenth Four Tet long player.

There’s probably little here that will convert those who’ve been unconvinced thus far, but long-term fans won’t be disappointed.

British guitarist Rob Marshall should have made it big with Exit Calm – who managed to record a debut up there with anything their influences The Verve put out.

After their second album, they called it quits but following collaborations with Mark Lanegan, Marshall back with a stellar cast of vocalists in his new project, including Depeche Mode’s Dave Gahan, Ride’s Mark Gardener and Lanegan.

DON'T MISS: How Humanist made one of the albums of 2020 with Pro Tools LE, 2 mics, Dave Gahan, Mark Lanegan and… a blanket

Blending everything from modular synths to soul loops, shredding guitar parts and pop radio vocal edits, Suddenly is the result of time spent creating countless musical sketches that were then assembled into a cohesive whole.

Highlights include Home, which sounds like it could have been plucked from the vaults of Motown, and the urgent Never Come Back.

Crush is a more intense experience than Elaenia, its jazz-tinged predecessor, with the soothing sound of the Fender Rhodes giving way to that of Sam Shepherd’s Buchla setup.

There’s real electronic beauty to be found in the dextrous Anasickmodular, while LesAlpx is ‘intelligent dance music’ that also manages to kick like a mule.

Away from the mainstream, this is truly progressive rock. Niger guitarist Moctar was recently named as one of Fender Next's 2020 artists and his band take the North African Tuareg desert sound into hypnotic realms with Moctar’s Strat sounds the epicentre of a sound that brews his western influences Hendrix, Prince and even Van Halen into a campfire pot of his traditions.

This is a great gateway to a whole new world of guitar music.

If you have hitherto been immune to the sound of the Polish electronic jazz scene, allow us to introduce you to Skalpel, whose fourth album Highlight is released this very day.

Having started their career with two albums on Ninja Tune, the duo now rely less on samples and more on virtual instrumentation, and the result is arguably their most well-rounded record to date.

If you need something to soothe you in these dark times, this four-track EP from blissed-out psych-funkers Khruangbin and the velvety-voiced Leon Bridges fits the bill nicely.

Hooks creep up slowly, and at 20 minutes, Texas Sun certainly couldn’t be accused of outstaying its welcome, but it’s not as featherweight as you might at first think. It might yet be your soundtrack to the summer that we all hope will come.

When the super-prolific, constantly evolving psych-rock Australians turned their hand to thrash and Motorhead rhythms on 2019's Infest The Rat’s Nest it could have stunk of false metal, but ended up sounding better than a lot of bands that live in this style full-time. Such is the King’s midas touch.

Here they’re reduced to a power trio with chief Stu Mackenzie’s tales of environmental doom given fearsome focus. True to form, last year’s predecessor, Fishing For Fishies, sounds nothing like this.

Influential label Hyperdub is itself waiving its fees for a month, so that any revenue through Bandcamp really does all end up in the artists' pockets.

Within the roster, and in recognition of this altruism, let's start with label owner and artist in his own right, Steve Goodman, AKA Kode 9.

His last album as Kode 9, Nothing (2015), was a challenging affair; sparse, experimental electronica, with little concession to comfort, but offering rewards to 'committed' listeners.

Sampa The Great - The Return

Sampa The Great's breakout album, The Return, topped Bandcamp's own best of 2019 list.

On it, this Zambia-born, Botswana-raised, Melbourne-based artist serves up a thoroughly now slice of global post-genre hip-hop.

You've got to love it when a body of music work gives you the impetus to make your own music and we're certain Lisa Bella Donna’s entire discography can do just that.

This particular inspirational long-player could’ve been simply entitled ‘a love letter to Moog’ as it was written on mostly Moog instruments and a few other vintage wonders, reeking of analogue goodness. Moreover, Afternoon Dreams was created in celebration of Moog’s annual event, Moogfest, and some of the work was composed for the film Moog Matriarch: Place / Time / Memory.

Definitely one for the synth-heads among us.

Bristol’s Om Unit slapped another genre-fluid EP down earlier this year in the form of Submerged.

Hovering around the constraints of ‘160’ (bpm), the six-track piece takes you on an energetic journey through familiar techno and dub-inspired fields and minimalist stiles. You can see where this analogy is going... Basically, this is cracking music to run with and to generally get shit done by.

Here’s a bold claim for you: Cory Wong is the funkiest funker in the world right now - end of!

The elastic-wristed, Vulfpeck six-stringer from Minnesota knows how to pen a groove and Motivational Music for the Syncopated Soul is choc-full of them.

Good luck getting past the first track, Limited World (feat. Caleb Hawley), though. This has to be one of the catchiest songs we’ve heard in the past 12-months.

The album was quickly followed up by Elevator Music for an Elevated Mood, which sees Wong maintain his fine funk form.

This is KiNK’s second outing and the Bulgarian’s sophomore effort does not disappoint, the four tracks are neatly interwoven with smatterings of IDM, techno, rave and house flavours.

The stand-out track for us has to be A.C.I.D Feat Red Eye, a classic Autechre-esque raver that will bury itself deep into that toe-tapping node of your cerebral cortex.

Each track takes you on a mini-adventure from start to finish with as much attention paid to the silent spaces in between as the music itself.

Few producers bring such a cultured approach to dance music and each track has you sitting up, making sure you don’t miss the smallest of details.

It’s hard to pick one stand-out track, the album in its entirety feels like one heck of a journey.