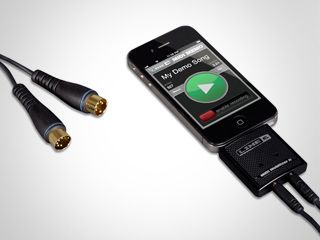 Physically, this looks pretty much identical to the original device, but there's an important change in that it now supports CoreMIDI, iOS's native MIDI protocol. Previously, developers had to make their apps MIDI Mobilizer-compatible using Line 6's SDK.

While this is great for compatibility going forward, it does suggest that support for the original MIDI Mobilizer may be limited in the future, especially when you consider that more and more interfaces - including IK Multimedia's new iRig MIDI - are going down the CoreMIDI route.

The MIDI Mobilizer II's specs are as follows:

- Compatible with iPod touch® (3rd and 4th generation), iPhone® (iPhone 4, iPhone 3GS), iPad® and iPad 2
- Compatible with all MIDI devices with standard 5-pin DIN MIDI connections
- MIDI In and Out signal-active LEDs
- Connects to the 30-pin connector on the bottom of iPod touch®, iPhone® or iPad®
- MIDI In and Out on MIDI Mobilizer via 2.5mm TRS connections
- Includes a pair of 5-foot, 2.5mm-to-5-pin DIN Planet Waves™ MIDI cables
- Powered by iPod touch®, iPhone® or iPad® — no batteries or power supply required
- Third party free and paid apps also available on the App Store
- Line 6 MIDI Memo Recorder app is free on the App Store