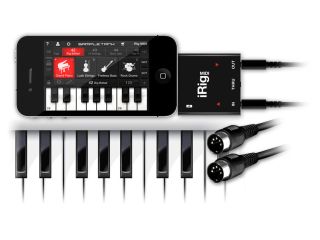 The iRig MIDI interface and SampleTank for iOS.

So it turns out that the new products that IK Multimedia has been teasing are for Apple's iOS devices. iRig MIDI is a new MIDI interface in the vein of Line 6's MIDI Mobilizer, while SampleTank for iOS is a mobile version of the company's software sound module.

The iRig MIDI does have a USP in that it's the only interface of its type to feature a Thru port. There are activity lights for the In and Out ports too, while the inclusion of a micro USB port means that you can charge your iOS device from a suitable source while you're MIDI-ed up.

It's also worth noting that the device supports CoreMIDI, so will work with countless apps right out of the box. It'll cost $70/€55.

One of said apps will be SampleTank for iOS - a software sound module designed for live performance. This 4-part multi-timbral software features over 500 acoustic, electric and electronic instruments that are powered by a 1GB sample library. There are 20 insert effects, too.

We're told that iRig MIDI and SampleTank for iOS are likely to be available at some point in August. In the meantime, here are the official specs for the two products - more details are available on the IK Multimedia website