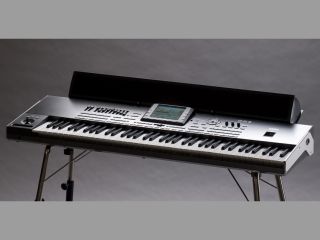 Designed primarily for the live performer, the Korg Professional Arrangers add to this a dual playback sequencer for non-stop performances, extra articulation for recreating convincing instrumental performances, and a number of ready-to-use Styles, allowing any song to be played with a full arrangement on the fly, with no pre-programming required.

The Pa3X comes in two different configurations; a lightweight 61-key model and an enhanced 76-key version, offering a semi-weighted action and a motorized tilting display; both keyboards feature aftertouch.

More than 100 drum kits, including new Real Ambience Drum Kits, are featured, all with Drums Family Easy Editing. The General MIDI (GM) sound bank has been improved for better compatibility with GM files.

Korg's DNC (Defined Nuance Control) system allows the performer to accurately and expressively recreate the articulation of an instrumental player in a way other keyboards cannot, providing extended realism of instrument parts. Assignable switches and a ribbon strip have been added to the existing joystick to control this extra articulation.

Up to eight Stereo Digital Multi Effect processors can be used at once. Over 140 effect types are available, including new vintage effects from the acclaimed SV-1 Stage Vintage Piano. The Pa3X also includes the powerful Waves Audio MaxxAudio suite of effects.

With the live performer in mind, the Pa3X offers a microphone input with premium vocal effects. TC Helicon vocal effects provide better pitch correction, plus four realistic voices and two doubled harmonies that can be controlled by the keyboard, MIDI and even MP3 input. Using the new Audio Chord Detection function, chord information can be automatically extracted from an audio file and sent to the Vocal Processor.

The Pa3X delivers over 400 Styles, straight out of the box. Each one is a fully realised musical environment dedicated to creating a particular musical style. Each Style now features four variations and four Fill In + Break patterns, one for each variation. Several new sophisticated parameters have been added with Guitar Mode 2, making the guitar tracks of every Style rich and authentic.

The Dual XDS Sequence Player now supports the "+G" format for both MP3 and MIDI files. This allows backing sequences to play with enriched lyrics and graphics, which can be displayed simultaneously via the on-board display or on an external monitor (VIF4 option required). MIDI files can also be displayed as scores in the same way. A new Marker Function allows direct jumps to a given position in the song.

Using the XDS Dual Song player, one song can load as another plays, with DJ-style motorized cross fading between the two. Both MIDI and MP3 files can be used, and both can be transposed, accelerated or slowed down. The new Advanced Vocal Remover allows vocals to be removed from MP3 files with unparalleled accuracy.