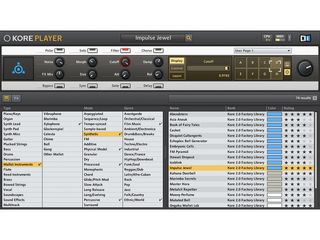 Native Instruments has announced that Kore Player - a cutdown version of its Kore 2 software - will be available as a free download from March 1st 2008. The company is also releasing a new batch of compatible Kore Soundpacks.

Kore Player shares the same architecture as the software that it's derived from. It's powered by six Native Instruments sound engines, features the same intuitive browser and offers a range of editing facilities. However, unlike the Kore 2 app, it doesn't come with a hardware controller and there isn't the same range of sound design tools.

A small number of sounds will ship with Kore Player, but if you want to get the best out of it, you'll need to invest in some of NI's Soundpacks. Four of these were released in 2007, and four more will start shipping on March 1st 2008.

Specifically, these are Pop Drums, Best Of Absynth, Kontakt Sax & Brass and Massive Expansions Vol 1. These all cost $59/€49, with the exception of Pop Drums which is $79/€69.

NI says that it's planning on releasing more Soundpacks throughout 2008.

To find out more about Kore Player and the Soundpacks, go to the Native Instruments website.