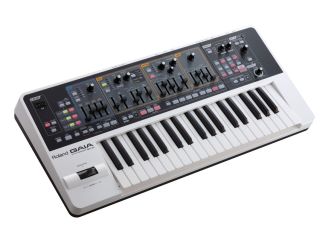 FRANKFURT MUSIKMESSE 2010 PRESS RELEASE: With its massive sound, hands on ease-of-play, and affordable price, Roland's GAIA SH-01 is high-performance value with old-school charm. Borrowing the name from the goddess of earth in Greek mythology, GAIA goes back to the origins of synthesis by using today's most advanced technology. The triple-stacked engine puts potent virtual analogue synthesis under your fingertips, yet the control panel is so fun, friendly, and inviting, even first-timers can create great sounds. The signal flow is simple to grasp, with logically arranged knobs, sliders, and buttons.

Get your teeth into the new triple-stacked virtual analogue engine, comprising three complete synths for incredibly thick, powerful sound. Unleash the three oscillators that drive a trio of multimode, resonant filters, multi-shape LFOs, and amplifiers, plus nine envelope generators, and a complete multi-effects system. It's like having three synthesizers in one! With 64 polyphonic voices onboard, GAIA makes it possible to play massive sounds without experiencing note drop-out.

From the silkiest reverb to the grittiest growl, GAIA's instantly selectable multi-effects will catapult your sounds into another spatial dimension. You can layer up to five simultaneous effects for dozens of variations. The onboard effects include reverb, distortion, fuzz, bit crash, flanger, phaser, pitch shifter, low boost, and delay with panning and tempo sync. Dedicated control knobs are provided for tweaking the effects in real time.

The front panel puts every control directly under your fingertips. There are no hidden menus, no nonsense. Just play and move the knobs and sliders, or wave your hands over the invisible D Beam for dramatic effects. The logically designed front panel shows the signal path from left to right. It helps beginners understand synthesis, while experienced players will love the instant gratification of hands-on control during performance.

Hold a note or chord and let the arpeggiator create musical magic automatically for you. The tempo can be set via cursor or tap tempo. In addition, the onboard Phrase Recorder lets you record what you play on the keyboard as well as the movements of the knobs and sliders. The controller data can also be played back independently to complement the notes you play in real time.

Connect directly to a computer (Mac or PC) with one simple USB cable, and stream audio directly to the software of your choice. GAIA's USB port can also be used to transmit and receive MIDI data, and to store your patches and phrases (recorded with the Phrase Recorder) to a USB memory stick. And for integrating with other external devices, the EXT input lets you connect external audio sources such as an MP3-player to play along with your favourite songs or backing tracks. Manipulate the incoming audio with three Centre Cancel modes, which let you minimise pre-recorded vocals, guitars, or bass.

At less than 10 pounds, GAIA is lightweight, compact, and great for musicians on the go. The 37-note keyboard is full size, so performers can play naturally and comfortably. The synth can be powered via AC or batteries for the ultimate in portable convenience. A battery-life indicator ensures that you won't lose power unexpectedly. When used in conjunction with a battery-powered amp such as Roland's CUBE Street, MOBILE CUBE, BA-330 or KC-110, GAIA can be played and heard anywhere.

Hands-on control and fat sound make this little powerhouse a joy for music students, songwriters, session players, and live performers of all styles and skill levels.