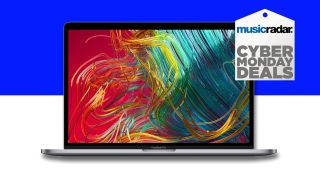 Apple might have just announced a 16-inch version of the MacBook Pro - our number one laptop for music production - but the biggest story right now is the monster Cyber Weekend discounts you can get on the 13 and 15-inch models. There's even a cheeky deal to be had on the new size, too.

Right now Amazon and Best Buy are offering some crazy discounts on the current 13-inch and 15-inch MacBook Pro models in both the US and UK. The highlight is a massive $450 saving on the 15-inch Intel Core i9 model.

The MacBook Pro has long been the most capable music production laptop around, comfortably running the latest DAWs and plugins and making it easy to edit video if you're a music vlogger. This laptop appears on most musician's wishlists. If you're one of them these deals are not to be missed.

Apple MacBook Pro 13-inch Core i5: $1,099 @Best Buy
If you're looking for something a little more portable for music making on the go, we'd recommend trying this 13-inch MacBook Pro with 128GB of storage and 8GB of RAM, currently being offered with a $150 discount.View Deal

MacBook Pro 15-inch Intel Core i9:  $2,349 at Amazon
This high-spec, good-sized MacBook Pro comes complete with 16GB of RAM, 512GB of storage and an AMD Radeon Pro 560X graphics card. This laptop would serve as a great centrepiece to your computer music studio.View Deal

Cyber Weekend deals from around the web