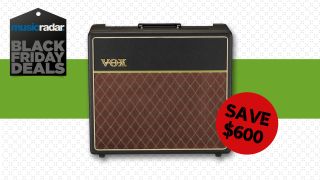 Vox has played a significant part in forging some of the most legendary sounds in music history. Guitarists like Brian May, Tom Petty, the Edge and Jimmy Page all started right here with this iconic Vox amp.

The AC15 was Vox’s first dedicated electric guitar amplifier, arriving in early 1958 as American rock ’n’ roll took Britain by storm. The amp inspired heavier and bluesier sounds. If that sounds up your street, then the AC15HW1G12C 1x12 tube amp is for you, delivering stunning vintage sounds that will teleport you back through the decades.

This amp normally sells for $1,499.99, but we've just caught wind that Sweetwater has cut that figure by nearly half, dropping the price down to just $849. For a hand-wired, two-channel, matched tube combo that also benefits from an OP switch that halves its output power for quieter home recording and practicing, this is one unbelievable Black Friday deal.

It's an amazing piece of kit and one that will do wonders for your sound. Our advice? Grab one before they’re all gone.

Vox AC15 hand-wired tube amp: $600 off at Sweetwater
Hurry and get this AC15HW1G12C combo for almost half-price right now at Sweetwater. Famous for its boutique vintage flair and rich sense of history, this tonesome Vox combo won't hang around for long.View Deal