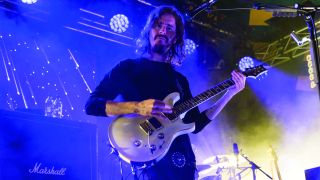 One of the things we especially like about Mikael Åkerfeldt, apart from his music, is he’s a straight-talking. In a world of careerist caution amongst musicians, he speaks his mind. And with a weighty back catalogue and thousands of road miles behind him, he’s got some thoughts about the current state of rock and blues guitar playing – including Joe Bonamassa.

While he’s clearly a fan of Joe, when asked by Premier Guitar who is inspiring his playing today, he had some thoughts on the idea of playing identity today compared to his guitar heroes of yesteryear…

"It's the same guys from back in the day,” Åkerfeldt answered. “There's some newer players that I think are really good, but many sound the same to me.

"It goes with metal music in general. I think it's very samey. Some of those players are fucking great. I just can't hear that it's them. It's not like Gilmour. You instantly hear it's him. Ritchie Blackmore, you hear it's him. Jimmy Page, Michael Schenker, Uli Roth... you hear it's them.

"Even if I love his guitar playing... like, Joe Bonamassa. I'm not sure how he sounds. I think he's a product of his influences. So I wouldn't be able to pick him out of a hundred players.

"He's just fucking skilled and has a great tone, great emotion, and all that stuff. He's also got his influences on his sleeve. He can emulate his idols to the point where he plays their stuff much better than they can. But what does Joe Bonamassa sound like? I wouldn't know.”

Anyone who has heard Opeth’s music will know there’s a whole heap of acoustic influences in there too.

“I discovered Tommy Emmanuel maybe 10 years ago,” continued Åkerfeldt. “He's fucking fantastic. When you hear him play, it's, like, 'Wow, I wish I could play like that.' I also love Bert Jansch and Nick Drake. Joni Mitchell is very underrated.

"And I still love Yngwie! He's got his sound and you can hear it right away. Unfortunately, you're going to hear he wrote the song, too. If he's reading this, I'm sorry. I love him. I have the utmost respect for him, but he could up his game a lot."

Read our own interview with Mikael Åkerfeldt on his guitar heroes. Opeth’s new album In Cauda Venenum is out now on Nuclear Blast records.