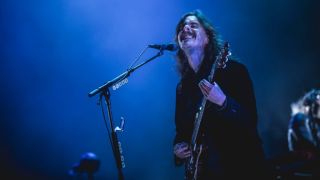 There’s an inherent evil lurking deep inside Opeth’s 13th studio album, In Cauda Venenum – which translates from Latin as ‘Poison In The Tail’ and more than lives up to its promise.

The Swedish progressive titans might not play extreme metal anymore, at least not in the studio, but the fruits of their labours remain equally unsettling. Perhaps even more so, considering it’s a quality that stems from the melodic content of the music rather than the more obvious tools of distortion and blastbeat.

Another factor in their sonic horror is the use of samples – something the band haven’t really experimented with before – giving this newest opus a heavy dose of cinematic flavour in both its English and Swedish versions. When MusicRadar meets with singer/guitarist Mikael Åkerfeldt, we point out that it could almost be a concept album. Almost, of course, being the key word in said observation…

“It isn’t a concept album,” says the mastermind at the helm of the music, before joking “but I could have said it was and everyone would be like, ‘Oh yeah, I knew it!’ Maybe it comes across like one, but it doesn’t have a storyline like King Diamond’s records.

"When I listen to Dark Side Of The Moon, which is allegedly a concept album, I don’t understand the concept other than it’s about life, death, fear, all that kinda stuff. Which this album is about too, in ways. In that respect, it could be regarded a concept album but that was never my intention… I’m not going to try and sell this as a concept album!”

Those voices sampled include the band and their family members, as well as characters from children’s show Skrotnisse Och Hans Vänner – heard at the start of lead single Heart In Hand – and Olof Palme, the Swedish Prime Minister who was tragically assassinated in 1986. Given the sensitivity around the latter, its inclusion is something Åkerfeldt feels rightfully proud of…

“I had to get permission from all these different people this time,” he continues, of the new responsibilities that came with expanding their already expansive sound. “I had to call up the old Prime Minister’s son to use a sample on the track Dignity. You have to remember the unsolved murder was very sensitive and controversial at the time, being a Prime Minister of a small country. I had to tread carefully. He was a Social Democrat, which is my party, and I even met him once as a child. Eventually I got a text back from the son saying he felt it was a beautiful presentation of his dad.”

Thankfully, most of the other samples were somewhat easier to obtain clearance for. As the Opeth leader himself explains, a lot of it came down to studio experimentation and a few haphazard “flukes”…

“As for the others, it’s Fredrik’s daughter right at the beginning just before Dignity kicks in,” continues Åkerfeldt. “My daughters are on there, and both of our girlfriends too. There’s a crying woman, me talking gibberish, Fredrik whistling and coughing like an old man walking around the park with his hands behind his back at the very start. You can hear ‘Hello, sir!’ in the English version of The Garroter, that’s actually me. I nicked it from I Am The Walrus by The Beatles ha ha! It all came together in the studio, when I started hearing parts that would work well for spoken word.”

However, rather than telling any kind of story, the predominantly Swedish samples were utilised purely for artistic effect.

“It is artsy, of course,” admits Åkerfeldt. Whenever you put something like that in your music, you are trying to say something. It all came in the studio, when I started hearing things that would work well for spoken parts. I just went on YouTube, it was a total fluke! I’d cut things to follow the chords, so you hear certain word before a change. It’s definitely something new that we haven’t done much of before.”

That’s not the only new development in Opeth’s sonic empire. This summer, both guitarists switched to using Synergy Amps for their live shows, following in the footsteps of American virtuoso Steve Vai. The racks were first used at ARTmania Festival in Romania and left quite an impression on the musicians. As it was ultimately Fredrik Åkesson’s suggestion, who better to explain why than the lead guitar maestro himself…

“That first night went great,” grins Åkesson. “The tones were good, warm and juicy, which made leads more comfortable. We’ve gone with the Friedman Dirty Shirley for clean and crunch, while for heavy rhythm and leads we use Soldano. It’s high-gain but still has a vintage character and remains quiet.

"I don’t even need a noise gate, which is great as I’ve switched to an all-analogue pedalboard with lots of MXR and Dunlop stompboxes. It’s been fun getting them all out again! I also put a Small Stone phaser in front, which I didn’t have before, in case we want to play Frank Marino. It has this brutal distorted tone when you put fuzz on it, which is good for those single-note riffs!

“The Synergy is very diverse because you can put two pre-amps through each power amp. If you want a Plexi tone, you can slot one in while the unit is on, it takes 30 seconds. You just switch the cartridge. I think there was a system like this before by Randall, but it was a bit dangerous… you could get an electric shock! Synergy have gotten it right. We still have our backup units, we don’t want to end up on stage with our pants down…”

“Yes we do!” interjects Åkerfeldt with a wry smile, before giving us an update on his board. “I, on the other hand, still don’t have many pedals. I’ve continued using the Fractal AX8 for my effects. Fredrik wants me to build an analogue pedalboard like his, but as I’m occupied with vocals, I’m still not so sure. The only thing I need is a Small Stone phaser somewhere on my board. I just love that sound!”

Here Mikael Åkerfeldt reveals the 10 guitarists that blew his mind…

Next Page 1. Ritchie Blackmore
The best of MusicRadar in your inbox