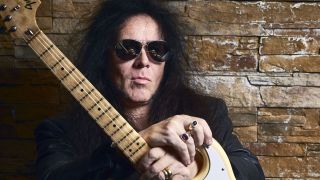 Yngwie Malmsteen is a player who really seems to  polarise people’s opinions. It’s a ‘Marmite thing’ - folk  either love him or hate him.

I guess this is mostly to do with his larger than life persona coupled with his image and the many ‘quotes’ and ‘tales’ that have been spread around over the years.

But all of that aside, I personally think he came along at  exactly the right time and gave everyone in the world of rock guitar a real kick up the backside, much like Eddie Van Halen did in 1978.

Yngwie Malmsteen: the 10 guitarists who impressed me most

I first saw Yngwie play live at the Marquee Club in London back in 1985, which was about a year after his first solo album, Rising Force, was released. He was technically incredible and was definitely  streets ahead of any rock guitarist around at that time.

His brand of classically influenced virtuosic rock combined with a hefty Ritchie Blackmore/Deep Purple influence and a killer wide rock vibrato  really did send legions of guitarists back into their rehearsal spaces  to study hitherto unlearned musical tools and techniques such as  harmonic minor scales, modes, sweep-picked triad arpeggios and über-fast picking lines.

There’s no denying that there’s a lot to be learned from Yngwie. In this lesson, I have crammed eight pretty typical licks into a 16-bar solo. Here’s a guide that will help you navigate it...

The opening phrase in bars 1 to 2 is very straightforward; you just need to play the string bend accurately with bags of conviction. To be authentic, make sure you perform the indicated pickup change from bridge to neck on the last A note.

Musically, this section uses the A harmonic minor scale: A B C D E F G# A - 1 2 b 3 4 5 b 6 7 1. The second phrase in bars 3 to 4 is a motif-based pedal tone idea.  In this, the A G# A motif is interspersed with an ascending B, C, D, E  line before ending up on the b 9 (F) that is then followed by an E-F-E trill that coincides with another pickup change back to the bridge and a smidgen of tremolo arm vibrato.

I'm pretty sure that this idea is influenced by classical violin playing - it certainly sounds like it to me. Yngwie often plays similar licks to this in his unaccompanied live solos.

All it consists of is a fast six-note legato - or picked scale figure - followed immediately by a long slide up to a target note that has tons of wide fret-hand vibrato applied to it.

This idea is played twice: initially targeting the root (A) and then the '3 (C). Accuracy of fret-hand sliding and a wide vibrato are both essential here.

A real Malmsteen favourite and a definite must-know lick - he uses this one all over the place! I have shown how I pick it, but do remember that it is only what works for me. Like many of the picking indications in this piece, it should be treated as a guide and then amended to suit.

Technically, you need to make sure the fast position-shifts are accurate and clean. And don't put too much fretting hand pressure on the slides, because if you do it is very easy to get stuck in a position and lose the desired flow.

Odd rhythmic note groupings abound in Yngwie's soloing A lot of the time it is simply because he has a 'destination point' in mind and is just cramming in as many notes as he wants/can en route.

He also likes superimposing rhythms. In this fast legato lick, there is essentially a quarter-note triplet (three in the time of two) that has each of these triplet notes divided again by three - resulting in nine notes every two beats or, in this case, 18 notes in a bar. I know this sounds a tad complicated, but it really isn't. Careful listening to the phrasing on the video should easily reveal what is going on.

Sweep-picked triad arpeggio ideas like these can also be heard extensively in Yngwie's playing and are definitely one of his most defining ideas. I love the way he 'rolls' them up and down the neck - it works brilliantly in rock.

In this phrase, we have three short arpeggios, each in a different position. Aim to keep a relaxed right hand and let the pick glide gently over the strings, much like a slinky falling down the stairs! Some light pick-hand palm muting will help, as will the indicated pickup change to the rounder and smoother-sounding neck position.

Scale ideas that are played laterally in sequences up and down single strings are yet another often-seen idea in Yngwie's playing. On the face of it, this two-bar run should be easy to play - assuming you can pick 16th notes at 160bpm!

It is actually made a little trickier and also sounds more interesting because the backing has a Far Beyond The Sun-type triplet feel to it and you' re having to play straight 16th notes against that underlying triplet- based pulse. You will need a solid internal subdivision clock going on here - which is great fun when you nail it.

Incidentally, on the video, I ended on a pull-off to an open E string. It's also fun and flashy to end on the high natural harmonic E note at the 5th fret. Yngwie often does this himself.

To prepare for this two-bar arpeggio idea, you should change the pickup to the neck position while the final open E of Example 6 is still sounding. The idea itself then starts with an ascending three-octave triad arpeggio that spans the 8th to the 20th frets.

The remainder of this lick is a typical descending sequence that uses a mixture of picking, legato and a final mini-sweep that ends on a very widely vibrato'd E note and a simultaneous final pickup change.

The final lick in bars 14 to 16 is simply an ascending series of hammer-ons and pull-offs that alternate between a chord tone and a higher neighbouring chromatic note.