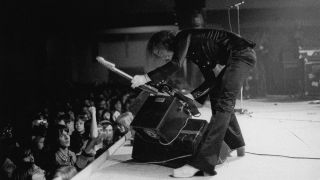 MusicRadar's best of 2018: Ritchie Blackmore the predictably unpredictable ‘man in black’ has always been a favourite of mine. He is often cited as being the rock-guitar link between Jimi Hendrix and Edward Van Halen, which isn’t too unfair an appraisal. His long, varied and successful career has seen him working initially as a 60s session musician then as a member of The Outlaws.

5 guitar tricks you can learn from Jimmy Page

This was then followed at various times by stints with the bands he is best known for - Deep Purple, Rainbow and Blackmore’s Night. Most recently he has been seen out on the road with yet another incarnation of Rainbow. His influence on rock guitar is totally undeniable: without Ritchie there wouldn’t have been Yngwie, for example, and who could imagine a world without Smoke On The Water?

Also, in performance terms, he has always had a great onstage image and has certainly been responsible for pulling some of the best guitar hero shapes known to man! There is a lot that can be learnt from him. Here we look at five choice musical examples. I have also come up with a short stylistic demo track that contains examples 1-4 within.

The obvious Blackmore reference for using 4ths would most likely be his iconic Smoke On The Water riff. However, there are tons more very memorable riffs that Ritchie has written using much the same idea. Rainbow’s Man On A Silver Mountain, All Night Long, Long Live Rock ‘n’ Roll and Deep Purple’s Mandrake Root and Burn all instantly spring to mind.

The example I have come up with here is pretty representative of the kind of phrase he might have played in Rainbow. In common with a lot of great ideas, it’s simple but it works brilliantly! As you play it use alternate picking and also use your left-hand thumb for all the low E string bass notes.

Because Ritchie always worked in bands that had keyboard players, the need to fill out the sound with lots of big rhythm guitar chords has been unnecessary. It’s common to hear him playing basslines or melodic single-note phrases.

The octaves and bassline ideas shown here are typical. Notice how there’s quite a lot of space and syncopation used. Ritchie has always used ‘space’ very well in his writing and the old adage of ‘it’s not just about the notes you play, it’s also about what goes on between them’ is certainly applicable here.

There’s one note different between the two scales: one has a major 7th and the other a minor 7th. When both are combined you can find some cool riffs. I have shown a couple of fingerings in Ex 5. Note how the combined scales contain b7, 7, 1 and b2, which are four chromatic notes in a row.

Ritchie has often included ‘classically’ influenced sections in his compositions. This example is typical and features a ‘cycle of 4ths’ progression outlined by triad arpeggios played in 8th notes but phrased in a 3-3-2 note grouping. As you play this you should try to accent the notes as indicated.

Also, it’s worth mentioning that at this tempo every note is picked. However, at faster tempos adding pull-offs would be appropriate. The notated section is also harmonised by another guitar playing exactly the same arpeggios a 3rd lower.

One of the things I like best about Ritchie is he is a true improviser and a terrific blues player who can extemporise with the best. The majority of his soloing seems to be totally intuitive and spontaneous. So for this example I have just shown a couple of scale fingerings and I very much hope you will take a leaf from Ritchie’s book and try them out over the ‘exotic’ scale section.

Finally, on the video I have shown a quick demo where I improvise à la Ritchie using both Phrygian dominant and double harmonic scales over the aforementioned ‘exotic’ section. Hopefully, this will help steer you into the ballpark that you should be aiming for.