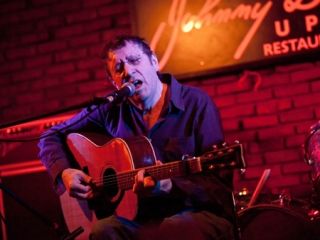 Scottish folk guitar legend Bert Jansch has passed away aged 67 at a Hospice in North London after losing his ongoing battle with lung cancer.

Jansch, who had been battling the disease since June 2010, leaves behind an irrefutable legacy of quality guitar music - from his pioneering time with Pentangle to his critically acclaimed solo work - his passing will be felt by guitarists and music fans the world over.

Born in Glasgow in 1943, Jansch spent his youth frequenting his local folk club, The Howff, and playing small shows around the UK and Europe, often depending on busking for his income.

During this period he discovered the music of Martin Carthy, Anne Briggs and Big Bill Broonzy, which would form the basis for his eclectic guitar style.

It was Anne Briggs (above) that taught Jansch the song that would become one of his signature pieces, 'Blackwater Side'. The same song would later prove to be a bone of contention, as Jansch believed that Led Zeppelin "borrowed" heavily from his arrangement when composing their own 'Black Mountain Side'.

Jansch later settled in London, where the mid-sixties folk boom was taking off. There he met producer Bill Leader and together they recorded a demo in Leader's kitchen that was quickly picked up and released as a self-titled album.

The guitarist became further ingratiated with the London scene, continuing to record and sharing stages with the likes of Paul Simon, Sandy Denny, Davey Graham and future collaborator John Renbourn.

After a recording an album together, 'Bert And John', Jansch and Renbourn went on to form the influential folk-jazz group Pentangle in 1967. They toured and recorded from 1968 to 1973, releasing their most acclaimed album 'Basket Of Light' in 1969.

However, it was a success that the band would not be able to replicate and after a period that had yielded six Pentangle albums and three solo records - including 1971's much-loved 'Rosemary Lane' - Jansch left the group in 1973.

The guitarist continued to record solo and with bands throughout the '70s and '80s, producing albums that were still strong, but not thought to match the quality of his late '60s output.

Pentangle reformed without Renbourn in 1982, recording a further five albums, all of which featured Jansch's virtuoso folk guitar and the group received the Lifetime Achievement Award at the BBC Radio 2 Folk Awards in 2008.

In 2006 Jansch recorded his 23rd and final solo album, 'The Black Swan', which gained a warm critical reception and featured modern artists like Devendra Banhart and Beth Orton. This, combined with a tour with Neil Young that exposed him to much larger audiences, ensured a fruitful final decade for the folk legend.

Tour-mate Neil Young once famously said, "As much of a great guitar player as Jimi [Hendrix] was, Bert Jansch is the same thing for acoustic guitar… And my favourite."

Jansch's musical legacy will not be easily forgotten, particularly in the guitar world, where everyone from Jimmy Page, Johnny Marr, Paul Simon, Nick Drake, Eric Clapton and Keith Richards have spoken about his playing in a reverential manner.

As the ever-modest guitarist himself told The Guardian in 2010, "I'm not one for showing off. But I guess my guitar playing sticks out."