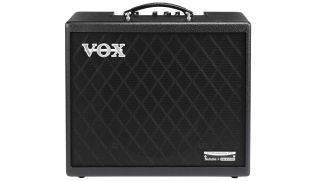 NAMM 2020: The small modelling amp market has never been so full of contenders; in the last few months we've seen Yamaha's THRII, Boss's Katana Mk 2 and Blackstar's Silverline. Now Vox wants a piece of the action with its new 50-watt Cambridge.

A major update to the solid state Cambridge Reverb amps of Vox's past, it's packing the NuTube technology and Virtual Element Technology (VET) we've seen on its previous VX50 GTV combo that seek to deliver realistic tube character, and it's bringing a host of other features too.

In addition to the classic AC30, this single unit gives you ten more amp models based on well-known classic, modern high-gain amps, and rare boutique amps.

Eight types of reverb, delays and modulation effects are built-in with players able to use one of each type simultaneously. Tap tempo is also included.

The Nutube itself is a vacuum tube. It uses electro-luminescent technology with the same structure as a conventional vacuum tube and has already need used to great effect in Vox's mini head range.

Like most modelling amps on the market, the Cambridge 50 features USB functionality for direct recording. Vox's Tone Room editor/librarian software and iOS / Android app can be used to access parameters that are not accessible from the amp itself, and store your settings in its library.

We'll have more new Vox products launching this week. And for more information on the current Vox range see voxamps.com