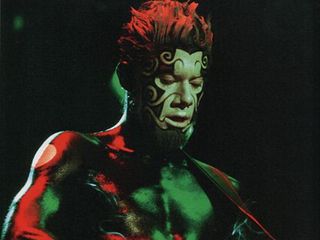 Borland and da Bizkit: he's in, he's out, in, out - decide already!

Limp Bizkit announced today they have reformed with the members of their most famous lineup, including guitarist Wes Borland. The only question is: How long will it last?

As of today, everything appears peachy in the land of the Bizkit, with Fred Durst, Borland, Sam Rivers, John Otto and DJ Lethal all back in the fold.

On the Limp Bizkit website, the famously at-odds pair of Durst and Borland even issued a joint statement of unity:

"We decided we were more disgusted and bored with the state of heavy popular music than we were with each other.

"Regardless of where our separate paths have taken us, we recognize there is a powerful and unique energy with this particular group of people we have not found anywhere else. This is why Limp Bizkit is back."

Is it for real?

Well, OK, then. Let's break out the red baseball hats and capri pants and party like it's 1999 again. The guys are even promising - or threatening - an album and world tour, with a trek through Russia in their sights (a slight to global relations, if you ask us).

Although the Bizkit appear to present a unified front, in the case of Wes Borland, it's debatable how long this reunion can continue.

Just last week, in an interview with the Michigan-based website mlive.com, to promote a Detroit show with his band Black Light Burns, Borland was quoted as saying, "I have no plans on working with Limp again. It's better for me for sure. I'm having a great time doing (Black Light Burns)."

And then, in an unmistakable diss to Bizkit, he reveled in his newfound artistic freedom with Black Light Burns:

"I can write a song and know what it's about and tailor the music about the intensity of the vocals. It all makes sense together, instead of random lyrics on top of music that sounds cool. It makes more sense."

Apparently, within the space of a week, Borland decided it made more sense to 'do it for the Nookie' once again. As for us, we're not holding our breath that this tour and album will be 'Rollin'.