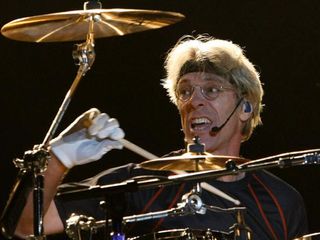 Stewart Copeland has a most definitive answer to the millions of music fans hoping for another reunion by The Police: Who knows?

"I mean, I intend to be on the planet here for another 50 years," the 57-year-old drummer tells Billboard. "Who knows what'll happen.

"To escape from The Police we had to melt down the cage and...dismantle the huge behemoth that grew up around the band. The three of us had to get away from it. As to whether or not we do it again, who knows."

Copeland has documented much of The Police's tale - 'war stories,' he calls them - in a new book called Strange Things Happen: A Life With The Police, Polo, And Pygmies. While he admits that both his former bandmates covered the group's history well, he feels that his take puts sheds new light on "the conflict in the band."

"It has always been too easy to assume it was just a clash of egos, and that was always very frustrating for me because it's so far from the truth," he says.

"In fact, we are very selfless in The Police, all three of us; we really leave our egos at the door and go in there and take a pasting from each other - and we take it. That's what life in The Police was all about. It was always a clash of musical ideals...We were fighting over the right things."

As for the immediate future, Copeland is finishing a concerto for The Dallas Symphony Orchestra that will have its premiere in 2010. In addition, he's finalizing an offer to work with a British opera company.