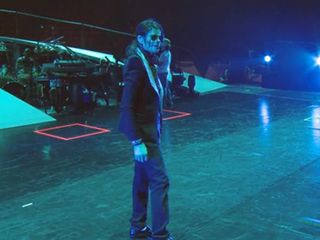 Michael Jackson runs through Human Nature with his band.

Freshly released footage from Michael Jackson's This Is It movie features him singing live as he works on a routine for 1983 song Human Nature.

In previous clips from the film, it's been hard to tell whether or not Jackson was miming to a pre-recorded backing track, but this one seems to suggest that he was planning on delivering live vocals during his ill-fated residency at London's 02 Arena.

It also adds to the sense of anticipation ahead of the This Is It movie's release - the film has been compiled from rehearsal footage and will run for two weeks from 28 October.

You can watch the Human Nature Clip below.