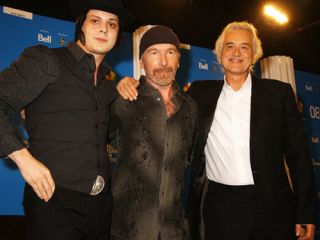 As MusicRadar has previously reported, the documentary It Might Get Loud, focusing on the individualized talents of guitar greats Jimmy Page, The Edge and Jack White, opens in August in select cities before going into wider distribution later this year.

Directed by Davis Guggenheim (an Oscar winner for An Inconvenient Truth), It Might Get Loud tells the story of the electric guitar as told from the point of view of Page, Edge and White.

It's one thing to film a guitarist in frenzied, impassioned performance. It Might Get Loud goes way beyond that: it explains the artistic process, it analyzes the poetry, it gets inside each guitarist's head. In those ways, it does what no other music-based film has done before.

Guitar World recently assembled the film's stars to talk about their involvement in It Might Get Loud. The three icons were more than happy to discuss what The Edge calls "one of the best documentaries I've ever seen."

I assume you've all asked to appear in other rock films and music documentaries. What made you want to get involved with It Might Get Loud?

Jimmy Page: Davis contacted me and outlined the project. He had just done the Al Gore film, but he was obviously a music fan, and I liked that. He had passion. And one thing he said was, "First, we'll have an interview and I'll record it, but it won't be on camera." More of a get-to-know-you thing and to build some momentum. And I thought, Hey, that's cool.

The Edge: I was told that they wanted to go after the guitar not just in technical terms; they wanted to explore the reason why people pick up the instrument - what is it about the guitar that offers people the opportunity to express something that they couldn't in any other way? The approach was going to be more sophisticated to what we've seen before.

I met Davis and we really hit it off. We talked for hours about creativity and the state of the planet. Then he mentioned Jimmy Page and Jack White, and I thought those were great choices. That's when I decided to take the plunge.

Jack, you weren't so sure at first, were you?

Jack White: I talked to Davis, and I thought, I don't know...It seemed a little too 'out there.' But what sold me was that he didn't know what he wanted to do. That spoke volumes to me, for someone to relinquish control and let things happen while the camera rolled. And, of course, when he said Jimmy Page and The Edge…well, what can you say? [laughs]

Page: I knew exactly what Davis was going for. It might have been nice for him to discuss a few numbers beforehand, you know, "Do you want to have a crack at these songs?" But that wasn't part of the equation. He wanted to see how we'd relate under unchartered circumstances.

None of us had ever played together before, and I think that was interesting, because each of us defines an era, if you like.

Next page: 'the summit'

Jimmy and Jack, you two had met before, but Edge, was this your first encounter with them?

Edge: I had met them before, but very fleetingly. Not even so much as to have a proper conversation. It was more like, "Hello. How's it going? Love your work" - that type of thing. This was my first time sitting down to have a conversation with either of them.

Page: The part where we all meet on the soundstage of the Warners lot, it was called 'The Summit.' It was funny because we all stayed in individual hotels, and each of us had our own trailers. Davis was very keen to have that meeting be a real moment. There was no passing around of notes about what we were going to do or play.

Edge: I was just so into the whole thing. I think you can really see that by the look on my face and on Jack's face when Jimmy started playing Whole Lotta Love, which is just the quintessential guitar riff of all time. Just to see how he played it…

I was going to bring that up: Jack, Edge, you two definitely had that look, like, "Holy cow, here's THE GUY playing THAT RIFF!"

White: It was certainly an electric moment. A song like Whole Lotta Love, we know it so well - it's like background music or the Bible. Or a street sign! But to see the original fingers playing it…it's like going inside the pyramids or something. [laughs]

Next page: Better music through technology?

Jack, at one point early on in the film you make a comment that "technology can be the death of creativity."

White: It can. It sure can.

Given that both Jimmy and certainly The Edge have made marvelous music with technology - and Edge would probably say that his music wasn't even possible without it - how do you stand by that statement?

White: It's a fine line. You can make a great record on Pro Tools, or Pro Tools can be the bane of your existence and destroy anything beautiful you put into it. It takes a lot of restraint and respect to…to keep it pure. And I think The Edge does that. He uses technology to his advantage.

Edge: Anytime you plug a guitar into an amp, there's technology involved. The important thing is that if you use technology to create a unique sound and it winds up being a big part of the inspiration for what you end up playing, then it can be a great thing.

There's this word that's thrown around a lot in music: authenticity. I think there's many roots to it. But I'll tell you this…when you hear music that's been inspired in an honest way, it has a power. And music that comes out of using craft over inspiration…you can tell the difference.

Near the end of the movie, you all play Zeppelin's In My Time Of Dying. Jimmy, did that come from you?

Page: It did. We were playing bottleneck steel, and I wanted to see how it would go. I thought it could be quite interesting. I think they kind of knew it.

White: That came out of us playing some slide songs. We had played Bullet The Blue Sky and it built into this crescendo, and it just kind of came up to play that one. Jimmy taught us how to play it. There was a real connection happening at that point.

Edge and Jack, it almost seemed as if you two were a little tentative at first, as if you were pupils at the feet of the master. But then, Jimmy, you seemed to give them this little signal that said, "Go for it," and then suddenly they started playing in their own unique styles.

Page: Well, that would have been the natural process of us all coming together and saying "hello" on the stage and knowing there was going to have to be some musical delivery. But Davis wanted to get a real meeting of the minds, and it turned into a real organic thing.

I have to say, it was great to hear The Edge play that song. He just went roaring into this bottleneck lead, and it was really trippy to hear him play so off-the-cuff and do it so well.

Edge: It was fun to delve into. There's moments where you're trying something out and you think, This is how it goes, and then, suddenly, music happens. That's what happened there. It was great.

Want to read more of this interview? Of course you do! Then be sure to pick up the September 2009 issue of Guitar World, on sale now.

Sign up for our free weekly newsletter
The free MusicRadar newsletter serves up the week's biggest artist and product new stories alongside exclusive tuition and gear reviews. Sign up here!