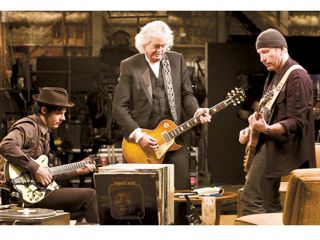 White, Page and Edge: three guitarists and the truth

Jimmy Page has the impish smile of a kid on Christmas morning. It lights up his whole face - his entire surroundings, really.

Watching him, you find yourself smiling simply because he's smiling, and it happens twice during the hypnotic and remarkable new documentary It Might Get Loud, which focuses with laser-beam intensity on the talents of guitarists The Edge, Jack White and, of course, Page himself.

The first time this occurs is in Page's house when he puts on an old vinyl single of Link Wray's Rumble. Listening to the languid, gravel-and-barbed wire-like guitar chords ring out and remarking on Wray's pioneering use of vibrato, Page is transported back to his youth, and his ear-to-ear grin is infectious.

It happens again in the movie's penultimate sequence, during a raucous three-way slide guitar jam in which Page, Edge and White perform Led Zeppelin's In My Time Of Dying.

At first, the younger musicians are tentative, reverent and differential, letting the silver-maned Page assume his rightful role as elder statesman and teacher, showing them the ropes. Gradually, Edge and White grow comfortable and confident, and they start playing with authority, ultimately going toe-to-toe with Page, their trademark styles bursting forth.

Page beams. He's formed a band, a one-time-only guitar supergroup that sounds utterly unique. This sequence alone, one which captures daring-do and discovery - and more importantly, the camaraderie all guitarists share - is the heart and soul of this thrilling picture.

That rarest of rock films

Conceived by producer (and guitar fan) Thomas Tull and directed with loving attention to detail by Davis Guggenheim (Oscar winner for An Inconvenient Truth), It Might Get Loud is that rarest of rock pictures in that it dispenses with every cliché the genre has, until now, offered.

Drugs, groupies, arrests, hotel debauchery - in other words, the movie Motley Crue hope to make - none of it figures in this poetic and inspiring love letter to the magical hold the guitar put on this pan-generational trio of six-string greats.

Before their much-anticipated summit at a Los Angeles soundstage, we are introduced to each guitarist in individualized and fascinating sections that rely on both archival footage and new vignettes that shine as bright a light on them as people as it does artists.

Page talks of his early days in Epsom, England, where he discovered his first guitar in a new house his family had moved into. Galvanized by the pre-rock 'n' roll sounds of Lonnie Donegan and the skiffle craze, he became, in his words, "addicted to the guitar."

The movie traces Page's years as London's go-to session guitarist and his brief tenure in The Yardbirds. This time frame is particularly compelling in that Page, with unflinching honesty, recalls his doubts about making it. Playing on pop records bored him to tears. And even in The Yardbirds, going from gig to gig in vans and cars, sleeping on top of equipment, getting sick on the road - wasn't he supposed to be doing something different with the guitar? Something special? Something that was all his own?

In 1968, he would answer that question with a certitude heard round the world.

In a newly shot portion, Page takes us to the mythic Headley Grange, the former poorhouse where Led Zeppelin recorded their iconic fourth album. Standing in the hallway of the residence, he explains that delivery men one day happened to set up John Bonham's drums in the foyer - a lucky accident, he says, because the resulting echo (he claps his hands and allows the sound to travel upwards) became a hallmark of that album and future Zeppelin records.

In sequences that are illuminating and sometimes comical, The Edge revisits his high school in Ireland, to the practice room where U2 actually formed. "We'd spend an hour or so pushing desks around and the rest of the time learning to play," he says, then remarking how terrible they sounded. (He tries to find the exact spot on the school's bulletin board where drummer Larry Mullen Jr tacked up a note looking for a band, but can't quite figure out where it was.)

But it is in Edge's private music room in Ireland, with windows offering breathtaking, panoramic views of the water, that we start to learn what makes him tick. It is the search for the sound that has no name - a maddening matter of trial and error. Working on the riff that will eventually become Get On Your Boots, he seems both amused and frustrated. "Some days, there's just nothing," he says.

Illustrating the importance that pedal effects have on his much-copied style, he plays the riff to U2's Elevation unplugged. It sounds simple and ordinary - he even admits as much. Then he pushes a few buttons and works the wah-wah, and viola! - an arena riff emerges. The music inside the technology, how machines can further a guitar's possibilities - these are the things that make The Edge get up in the morning.

While Page and Edge come off as charming and self-deprecating, Jack White is the trickiest piece of the puzzle. This is evident during the film's opening frames in which White, standing at the porch of an old farmhouse in Tennessee, builds an instrument from a block of wood, a Coke bottle and a thick strand of wire (most definitely not a guitar string), and then fires the crude device through a vintage amp, its piercing sound scaring the bejesus out of grazing cows in the distance.

"Who says you need to buy a guitar?" White says ironically.

For White, who instructs an actor playing 'Young Jack' how to kick and stomp his way through the blues, it's all about aggression and attitude. Technology means little to him (it "destroys the truth," he asserts); passion and desperation are everything.

"Why do you even need six strings?" he asks at one point. "Why not three?" In his view, playing guitar is a battle, and one the musician must win at all costs.

Much of the time, White, the youngest of 10 children, seems to have a chip on his shoulder. He takes us to the hardscrabble streets of Detroit, where, growing up, playing an instrument was looked down upon. Hip-hop was the rage and turntables ruled. But White, hellbent on bucking trends, resolutely picked up the guitar for the very reason that it was the most uncool thing in the world a guy could do.

We pay a visit to the upholstery factory where he once worked. There, White learned a trade and formed a musical bond with his then-boss. Detailing the formation of The White Stripes, he explains his desire to strip everything down, music and visuals, to their simplest and most childlike elements. Excess was verboten; minimalist expression was the ticket.

But White's tough-guy veneer disappears during a surprisingly moving sequence in which he puts on a copy of Son House's Grinnin' In Your Face. Getting lost in the track, White's face softens, his eyes dance - a sense of wonder emanates from his entire body. Taking the record off the turntable, he says, "From the first time I heard that, it was my favorite song. Still is."

Of course, the meeting of the three guitar giants is what will attract the most attention to It Might Get Loud, and it doesn't disappoint. There is a hilarious bit in which The Edge instructs Page and White on the correct way to play I Will Follow. Calling out the changes to Page, Edge looks momentarily uncomfortable, as if he's thinking, Who am I to tell Jimmy Page how to play guitar? But within moments, the three sound massive.

Edge and White don't dare pick up their guitars when Page shows the two whippersnappers how he chords Whole Lotta Love. The apprentices sit in awe as the sorcerer lays down the volcanic riff that inspired millions to pick up the instrument. For a fleeting second, Edge and White share sidelong glances, both undoubtedly thinking the same thing: How fucking cool is this?!

It Might Get Loud will be released by Sony Pictures Classics on 21 August. MusicRadar will have future reports on the movie during the coming months.