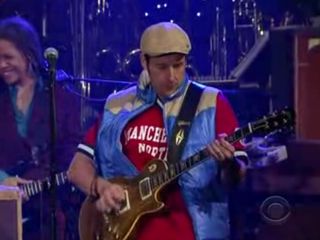 Recently, Adam Sandler turned up on the David Letterman Show, strapped on a Les Paul and covered Neil Young's classic Like A Hurricane.

And it was no joke. Really.

Joined by veteran guitarist Waddy Wachtel and backed by the Late Show Orchestra, Sandler's take on Young's 1977 song was surprisingly solid and gutsy.

The comic actor's reedy voice was a dead ringer for Young's. He even played a raw and ragged guitar solo - another perfect match. Check out the video below.

Sandler's version of Like A Hurricane will be featured on Covered, A Revolution In Sound, due in March from Warner Brothers Records. The album celebrates the golden anniversary of the label and sees 11 artists currently on the roster performing a favorite rock song from Warner's first 50 years.

1. Mastodon: Just Got Paid (by ZZ Top)
2. The Black Keys: Her Eyes Are A Blue Million Miles (by Captain Beefheart)
3. Michelle Branch: A Case Of You (by Joni Mitchell)
4. Against Me!: Here Comes A Regular (by The Replacements)
5. Missy Higgins: More Than This (by Roxy Music)
6. James Otto: Into The Mystic (by Van Morrison)
7. Adam Sandler: Like A Hurricane (by Neil Young)
8. Taking Back Sunday: You Wreck Me (by Tom Petty)
9. The Used: Burning Down The House (by Talking Heads)
10. Disturbed: Midlife Crisis (by Faith No More)
11. Avenged Sevenfold: Paranoid (by Black Sabbath)
12. The Flaming Lips With Stardeath And White Dwarfs: Borderline (by Madonna)

We would've loved to have heard Neil Young return the favor and cover Adam Sandler's Chanukah Song. Maybe on the next compilation.