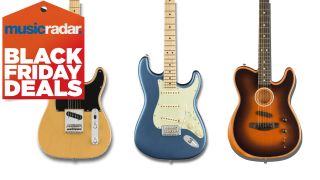 Following the invention of the world’s first commercially viable electric guitar in 1950 - the Broadcaster, which would eventually get rebranded as the Telecaster - Fender created the Stratocaster in 1954. It would go on to become the best-selling guitar of all-time.

Both instruments are still hugely popular to this day, from the affordable Mexican-made lines right through to their American flagships, bringing their rich sense of history, timeless aesthetics and world-class tones to stages and studios around the world.

Perhaps Pink Floyd guitar hero David Gilmour said it best when he admitted “the Stratocaster is the most versatile guitar ever made, and it has this funny way of making you sound like yourself”.

Here, we round up all the best Cyber Monday deals on the Big F's range in one handy wallet-baiting list.

Squier Bullet Stratocaster HSS with tremolo: only $109.99!
The Squier Bullet Strat is the perfect guitar for beginners. Featuring a solidbody construction with a 25.5" C-standard shaped maple neck, the guitar's specs massively defy its price point. You needn't worry about an extensive setup process either - you'll be ready to start playing straight out of the box.View Deal

Squier Affinity Telecaster HH: was $199.99, now $159.99
Featuring a solid alder body with a gloss metallic black finish, this humbucker loaded electric guitar would be the perfect starter guitar, or indeed a worthy addition to any guitarist's collection.View Deal

Fender Player Telecaster Silverburst: was $674, now $574
Get your hands on an authentic Fender Telecaster this Black Friday for just over $500. With a classy Silverburst finish and A-class tone, this guitar would be more than a worthy purchase.View Deal

Get $40 off Squier's Stratocaster Starter Pack
For just $179, you get a fantastic beginner electric guitar, a 10-watt practice amplifier, guitar cable, strap and a set of picks - perfect if you're just starting out, or have a potential new player in mind.View Deal

Fender Player Jaguar in Surf Pearl: now only $499.99
Now's your chance to bag an awesome Fender offset for under $500. With an alder body, Alnico pickups and a perfectly configured neck, this electric guitar has the looks and tone to boot.View Deal

Squier Bullet Mustang: now only $119.99
Get the perfect electric guitar for beginners in this unbelievable Black Friday deal. Start playing straight out of the box, thanks to a short 24" scale, which makes your first chords and solos easy.View Deal

Start playing for less with $30 off this Squier FSR Bullet Tele
This rock-solid, entry-level Tele is perfect for beginners and students, and is available now for just $149 - $30 off its usual $179 price tag!View Deal

Fender Stratocaster HSS Pale Moon: $2,499 at Guitar Center
Exclusively available at Guitar Center, this hot-rodded Strat boasts an HSS pickup configuration and one of the most distinctive fretboards you’ll see on any guitar. Team that with its gorgeous quilt maple finish and you’ve got a one-of-a-kind take on Fender’s most famous design.View Deal

Fender QMT Telecaster Pale Moon: $2,499 at Guitar Center
If you’re after a Tele with a difference, this striking example could be the one for you. Named after its unique Pale Moon ebony fingerboard, this quilt maple-topped, American-built electric features Custom Hot pickups for a guitar that sounds as good as it looks.View Deal

Start playing for less with $50 off this Squier Bullet Tele
A great deal from Musician's Friend, this rock-solid, entry-level Tele is perfect for beginners and students, and is available now for just $129 - that's a massive $50 off the usual $179 price tag!View Deal

Get the highly regarded Fender Bassbreaker for only $549
With a Celestion 1x12 speaker, tons of recording-friendly features and an unparalleled tone, this combo is a true all-rounder - and it's now available for $200 off in this limited-edition finish!View Deal

Squier Bullet Stratocaster HSS with tremolo: only $109.99!
The Squier Bullet Strat is the perfect guitar for beginners. Featuring a solidbody construction with a 25.5" C-standard shaped maple neck, the guitar's specs massively defy its price point. You needn't worry about an extensive setup process either - you'll be ready to start playing straight out of the box.View Deal

These guitars bring high-quality, American-made instruments to new levels of affordability – featuring Fender’s high scoring Yosemite pickups that were designed in collaboration with multiple Grammy-winning producer/engineer Dave Cobb [Lady Gaga, Rival Sons, Chris Shiflett]. Both benefit from some carefully-considered modern appointments, but hark back to the tones and traditions of old.

The Player series Stratocasters and Telecasters are also notable for their affordability, costing roughly half of their American equivalents. That said, very little is lost in terms of tone or build – the instruments are simply made to American standards some 149 miles south of the main factory in Corona, California.

Then there’s American Acoustasonic Telecaster, yet another innovation from a company who have thrived in such endeavours, which marries those renowned electric tones with a powerful acoustic that’s voiced through a world-class Fishman-designed engine. Almost 70 years on creating that first commercially viable electric, Fender continue to lead the way in all things guitar. Make the most of this Black Friday and get yourself a piece of that legacy.