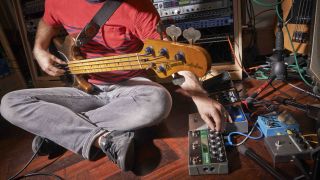 If you've ever sat down with a bass guitar, a row of effects pedals and an amp and tried to replicate the tone of a classic bassline, you'll know that it's harder than you'd think.

There are so many variables, from your strings, guitar EQ, effects sequence and amplifier tone controls that it's easy to get lost among all the signal-shaping options.

But don't despair: in bass world, as long as you're not searching for the craziest tone in history, achieving a useful sound is largely a case of balancing low-end, mids, treble and overdrive.

Ahead is a line-up of 10 definitive bass tones and how to recreate them. Ready to sound like a bass hero? Let's go!

Let’s kick off with the man who first brought mellow bass tones to the masses! When Paul McCartney plugged in his Hofner 500/1 Violin Bass for the Sgt Pepper’s Lonely Hearts Club album sessions all the way back in ’67, he was already dabbling with a bigger, tougher instrument: the Rickenbacker 4001.

However, the little bass with the F holes did a sterling job on Penny Lane, a song that required a bass-heavy tone with almost no mids or treble.

You can achieve almost the same sound with more or less any bass, as long as the top-end is scarce: keep the notes staccato and muted for the classic Macca effect.

Tone tips: If there’s no violin bass around, try any hollowbody bass with flatwound strings, use a pick... and roll off the top-end!

The late Chris Squire inspired a generation of bass players thanks to this early Yes single.

The bass part, a sixteenths-heavy showcase for Squire’s flashing fingers, was unusual for the time, because it featured a trebly edge and a crunchy distortion without losing clarity.

How the great man achieved this tone was a mystery until the mid-’70s, when he revealed that he had customised his Rickenbacker 4001 so that it sent two signals, one per pickup. The bridge pickup went to a guitar amp - hence the clear top-end. There’s a lesson there for anyone who thinks that the old stereo-output trick was a recent innovation from Royal Blood...

Tone tips: Aim for a toppy, gritty sound with a touch of distortion. Keep the high-mids

Who apart from Jaco Pastorius would write a love song using only bass harmonics?

You could profitably study any song from Jaco’s self-titled album of ’76 and come out the other side a much improved bass player, but if you’re keen on nailing a Jaco tone that everyone will recognise, try this one.

Your grasp of natural and false harmonics will need to be on point, of course, particularly if you’re being truly authentic and playing this song on a fretless - but once you’ve got it down, you’ll be the talk of the jazz club.

And there we were, thinking that harmonics were only good for tuning up, eh?

Tone tips: Aim for plenty of mids and top on your fretless, and make sure your fretting hand is perfectly in position, whether you’re playing natural or false harmonics

The Stranglers' Jean-Jacques Burnel: “We try to rehearse without looking at our guitars, so you're free to play with the song”

Jean-Jacques Burnel is not a man to be trifled with, either in person (he’s a karate master) or musically (as this single demonstrates).

The instantly recognisable bass chug that introduces this totally snotty (and also slightly pervy) song from the height of the punk-rock movement is an all-time classic.

JJ achieved it because he picked with massive force, and also because his Hiwatt cab speaker cones were blown, giving the sound a thrillingly nasty distorted edge.

You’d be advised to seek a modern distortion rather than take a Stanley to those precious drivers, mind - unless you’re in a destructive mood.

Tone tips: Roundwound strings, a pick dug in hard near the bridge and a spiky overdrive pedal such as an Aguilar Agro will get you that JJ tone

Did he use a distortion pedal like the rest of us? Not likely, as he told Bass Guitar magazine a few years back. “I’ll tell you the controls, left to right. Presence is at three o’clock. Bass is off. Middle is full. Treble is off. Volume at three o’clock,” he barked, between swigs of his Jack Daniel’s.

Note that massive onstage volume wasn’t necessarily his thing: instead, all those mids broke up the sound for him. He also played a lot of root-fifth power chords, so keep a pick handy.

Tone tips: Overdrive your cab to breaking point if you dare; if not, use an overdrive pedal, perhaps even a guitar distortion such as a Boss DS-1

How on earth Cliff Burton persuaded his mates in Metallica to let him record a bass solo on their very first album, we’ll never know, but thank heavens he did, because it was a thing of thoroughly aggressive beauty.

His Rickenbacker 4001, modded with a Fender Stratocaster pickup under the bridge (bet you didn’t know that, eh?), pumped out top and bottom-end by the gallon, which he then overdrove with a Morley wah and modulated with a Bass Balls filter.

Tapped and chordal sections added variation to his frantic fingerstyle, with the solo itself based on classical etudes, which he’d studied as a lad and refined in his pre-Metallica band, Trauma.

Nowadays, you can get this sound, or a decent approximation of it, via a signature Morley pedal, which was launched a couple of years ago.

Michael ‘Flea’ Balzary is known for his slap bass playing, but when his band the Red Hot Chili Peppers decided to mellow out a little for their planet-shafting hit album Blood Sugar Sex Magik in 1992, he refined his usual slap storm into a more subtle fingerstyle.

That said, on the album’s lead single, Give It Away, Flea attacked those strings with abandon: we dread to think what the skin was like on his fingers after the furious, octave-wide slides on the E and A strings, assuming there was any skin left, of course.

His slightly crunchy tone allowed the line to stand out through the layers of guitar on the track.

Tone tips: Although there’s no actual slap and pop on this line, use plenty of top for clarity on those slides

Jeff Ament is one of bass guitar's unsung heroes, but that needs to change forthwith, because his work on Pearl Jam’s early hit singles helped to make them catchy and memorable.

Admit it, when you hummed along with the song Jeremy, you were just as likely to be following Ament’s slick chordal fills in the verses as you were to be reproducing Eddie Vedder’s vocals.

Note that the bass doesn’t need an obnoxious top-end to make itself felt: this is one of the most low-end-heavy tones on this list, alongside Paul McCartney’s.

The fact that Ament was using an 12-string bass helps to explain the instrument’s presence on the track, although you won’t hear the extra strings ringing out individually - they simply add to the overall tone.

Tone tips: Grab a 12-string of your choice and dig in! Aim for clarity and precision on the riffs

When a bassist is faced with a bottom-heavy synth bass in a song, what’s he or she to do? Why, play high up on the neck, solo until the cows come home and make sure the audience can damn well hear you!

That’s what New Order bassist Peter Hook did when his band remixed the True Faith single for a reissue in 1994, dialling up a top-heavy sound and delivering one of his patented pick-driven solos for the intro and between the verses.

Sure, these parts are mixed relatively low, but you know they’re there because Hooky cleverly picked a frequency range where they would stand out. There’s some pretty useful advice there for any bassist, we reckon.

Tone tips: Grab more or less any fretted four-string, scoop the tone and play above the 15th fret for that Hooky hum

When Muse released Hysteria in 2003 and the bass community heard Chris Wolstenholme’s introduction for the first time, the number of ‘What pedals is he using?’ questions that appeared on bass forums almost broke the internet.

Oddly, though, you can recreate that tone with 90 per cent accuracy using a single distortion pedal of your choice, as long as your picking is super-tight and you stay away from bright mids and top-end.

Make that overdrive too aggressive, and you’ll create volume spikes all over the place - so consider a judicious bit of compression to avoid deafening the rest of the band.

Tone tips: If you don’t have the time or budget to copy Chris’s pedalboard, find yourself a cool bass overdrive, roll the top-end right off and go for it!