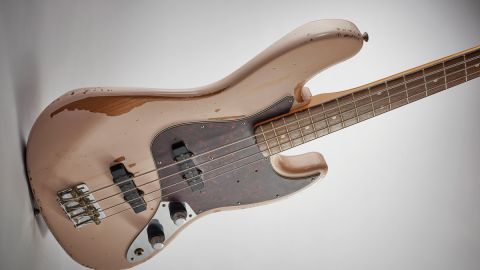 A fine bass on its own merits, signature or not.

One mention of Red Hot Chili Peppers bassist Michael ‘Flea’ Balzary and whole swathes of the bass-playing community fall into a trance - and with good reason.

For a certain generation of players, he was the figurehead that turned their heads, and ears, towards the virtues of the bass guitar, as Mark King did a decade earlier. Flea has had previous links with several different instruments of note: this Fender came about after the company created a signature model based on a 1961 Shell Pink Jazz given to Flea by a (rather generous) fan.

Made in Mexico and just breaching the £1000 price mark, this may well represent good value to many players. Or does the Flea name simply disguise the fact that this is just another relic-ed Jazz? Read on and we’ll find out!

As most players will be familiar with the essential features of Jazz basses, let’s cut to the chase. The Shell Pink alder body bears all the usual Jazz hallmarks but with plenty of ageing to replicate Flea’s own bass. Even the four-ply tortoiseshell scratchplate hasn’t escaped unscathed, while both the body and neck have had a Road Worn nitrocellulose lacquer finish applied, giving the whole instrument a played-in feel. The chamfering and contouring make the bass very comfortable to wear and although there is some headstock bias, it sits perfectly when placed on a strap.

The neck is very much what you would expect of a Jazz bass; slim dimensions, built for speed and comfort, with a 38mm nut, 19mm string spacing at the bridge and an inviting C-shaped neck profile. The action feels a little high but is easily rectified, and generally, the overall setup
is decent, with no sharp fret edges and a well-seated neck pocket.

To complete the vintage vibe, a bone nut has been fitted, aged white dots adorn the rosewood fingerboard - with even older-looking aged position markers along the side of the neck - and vintage-style reverse tuners, which turn smoothly without resistance.

The old-school features don’t end there. Dual stacked volume and tone controls have been utilised, in keeping with the aged model this is based on, and perfectly complement the pair of Pure Vintage 64 single-coil pickups. If you’re wondering where the signature is, flip the bass over, where you will see Flea’s name engraved into the neck plate.

The natural character of this particular bass is warm and rounded, which is not what we were expecting. On plugging the Jazz in, although it had the sonic attributes that any twin single coil-equipped bass will display. It felt and sounded less responsive and lively than, say, the Geddy Lee model we looked at recently. That’s not a bad thing, it’s just different; the Flea Jazz is smoother and darker-sounding than the Geddy. In terms of performance, the pickups are powerful, offering plenty of forthright presence for a passive instrument. The bridge pickup, in particular, sounds punchy and honky without being too brittle.

Thankfully, the stacked controls are functional through their complete turn, so there is plenty of light and shade on offer when bringing the tone controls into play. Although some players prefer the volume/volume/tone arrangement on a Jazz, this particular setup works very well, and perhaps offers a little more tonal flexibility to the player.

The familiar Jazz ‘bounce’ and ‘burp’ are still very much present, while the neck pickup rounds the overall tone out nicely. It also does a passable impersonation of a split-coil pickup, should you be after a more mellow tone. Jazz basses are well known for their slap tones, of course, and this bass is equally adept in that department.

Although it’s not even close to Flea’s Music Man, Wal or Modulus tones, this particular Jazz has much going for it and in terms of playability, it is a fine bass to get stuck into and spend some time with. It not only covers the obvious funk rock persuasions you would expect, but is equally at home with other musical styles. This is why the Fender Jazz is the most successful bass of all time, as it covers so many musical bases so well. No-one ever lost an audition because they owned a Fender Jazz...

Put simply, this is a fine bass on its own merits, providing old-school looks and vibe with funky sounds, solid sonic delivery and fine playability. At just over £1000, similar alternatives can be found at a cheaper price and sure, you are paying for the Flea connection - but then the bass is made in Mexico, rather than the US factory, to make it affordable. It’s certainly a bass worth checking out, whether you’re a Flea fan or not.