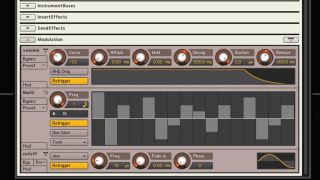 Of all the various modulation sources available in your soft synths and samplers, the step sequencer is probably the most freely creative. The ability to sequence parameter movements over time without the fixed-stage restriction of an envelope or cyclical regularity of an LFO is incredibly liberating.

In this walkthrough, we'll show you how to turn a conventional piano chord into a much more interesting musical entity using Kontakt’s powerful step sequencer. For more modulation and sound design tutorials, pick up the Autumn 2017 edition of Computer Music.

Step 1: We’re starting with a rave chord stab sample loaded into NI’s Kontakt 5 sampler. As is often the case with a sustained sound like this, it can be tough to compose a riff over a solid beat pattern - the piano sample’s static dynamics make it sound flat and repetitive.

Step 2: A dash of rhythmic modulation will breathe life into our static sound. By using Kontakt 5’s step modulator to sweep Volume, Pan and a resonant band-pass filter’s Cutoff, we’ve transformed the static piano sound into a bubbling, characterful sequence.

Step 3: To crunch up the stepped modulation we just dialled in, Kontakt 5’s Lo-Fi effect is inserted after the filter, but before the reverb and delay effects. Finally, to bring out the top end, the step modulator is also used to modulate the level of the Lo-Fi effect’s Noise dial, which blends in top-end fuzz only over louder steps.