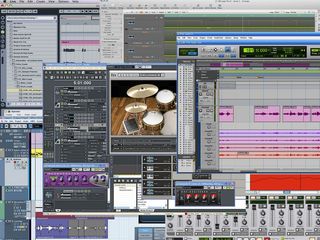 So many recording apps, but how do you pick the right one?

Barely a day goes by without someone asking for our advice on choosing a DAW - that is, a central music-making program. While DAWs definitely have differing strengths, all of the major players are thoroughly up to the task of producing any style of music to a professional level, the exceptions being those without proper audio recording abilities, which are hence suited to more electronic styles.

Most DAWs come as a 'package' consisting of the core application (the DAW itself) and a bundle of (usually exclusive) plug-in instruments and effects to use with it. While the included plug-ins can be a major deciding factor, the app itself should take precedence in your decision-making. You can always buy plug-ins to round out your setup, but you can't buy missing features for the DAW itself. Also consider that if your aim is recording/mixing audio, effects will be of much more importance than instruments.

Before plunging into any potential purchase, check out web forums (not least MusicRadar's) to see what existing users are saying about the software. Take note of common issues and confirmed reports of serious bugs (ie, showstopping crashes, not minor graphical glitches), but don't put too much stock in one or two people complaining loudly. Most DAWs have demos that you should try to ensure that they play nice on your system.

Also take into account the prospects for hardware integration. An increasing number of companies offer dedicated hardware for their DAWs, such as control surfaces and audio interfaces. Digidesign (now Avid) pioneered this approach with Pro Tools, but you'll also find hardware designed for Cubase, Sonar and Live.

Before talking about specific DAWs, we'd like to dispel the myth that some DAWs have a better 'audio engine' than others, and sound deeper, wider, smoother, etc, even when just playing back a few audio files. It's not true: all of today's DAWs sound the same for basic playback/ recording. Things that can make a difference are the effects you use, and subtle things like the DAW's automation resolution, pan law, etc.

So what are your choices? Those looking for an easy option have a few available to them. For Mac users, it's a no-brainer: go for Apple's own GarageBand, which comes with every Mac. If it's not already installed, dig out your copy of iLife (£71) and load it up. It has straightforward audio and MIDI capabilities, and effects, instruments and sample loops. PC users should try Acoustica's Mixcraft 5, which is much like GarageBand - in fact, it's slightly more capable.

Those seeking a 'traditional' do-it-all DAW that's strong for both MIDI and audio are spoilt for choice. Steinberg's Cubase is ever popular - it's cross-platform (ie, for PC and Mac), with a clear GUI and great MIDI features. It even has a vocal pitch/time editing tool, VariAudio, that could save you the cost of a copy of Melodyne or Auto-Tune.

In general, Cubase's plug-ins aren't as highly regarded as those of, say, Logic or Sonar. The 'window madness' of the GUI can also be distracting (an extra monitor can alleviate this), and you need a USB dongle to run it - not ideal if on the move.

Moving on, you've surely heard of Pro Tools - it became an industry standard due to its recording and mixing features, but today it's more in line with other DAWs, with good MIDI handling, quality plug-ins, etc. It runs on PC and Mac, but you need a compatible audio interface to use it (you can buy it as a bundle with such an interface). It's a wise choice for those working with audio, recording bands, etc, especially if you plan to take your projects into a studio to mix, as it's quite likely they'll have Pro Tools too.

Note that Pro Tools LE/M-Powered don't have automatic latency compensation, and they use their own plug-in format, RTAS, too, so check that your favourites come in RTAS versions. There are VST/AU-to-RTAS 'wrappers', but they're not guaranteed to work with everything.

New to the cross-platform DAW scene is PreSonus' Studio One. It doesn't have the numerous instruments and deep features that some DAWs boast but it should be on your 'to try' list. The cross-platform Reaper has rocketed in popularity. It's keenly priced but matches up to the big boys in terms of features.

Like Cubase, Apple's Mac-only Logic Pro is popular with producers of all styles of music. It's part of the Logic Studio (£408) bundle, which represents incredible value for money. For Mac users, Logic would be our first recommendation, as there's little not to like about it.

An OS X alternative would be Digital Performer - in our review we reckoned it combined "the MIDI expertise of apps like Logic Pro with magnificent audio handling on a par with Pro Tools", although we thought the GUI could be easier to navigate.

Fighting the PC corner, we find Cakewalk Sonar. Its GUI isn't as graceful as Logic, Cubase et al, but it's every bit as powerful, with a silly amount of plug-ins and features. Also on the PC-only side you have Magix Samplitude, which is harder to learn and has a few quirks. It boasts superb effects, though, and a few killer features like Revolver Tracks and object-based editing, for applying effects to individual audio clips.

That's about it for 'traditional' DAWs, although Ableton Live isn't entirely dissimilar to them, and it can be used for conventional audio/MIDI recording and editing. It's not the best at this, though - what makes it shine is its flexibility and unique interface. If you want to mash up loops on the fly, improvise with chains of effects, bounce riffs around spontaneously, and control practically anything you can see on the screen, then Live is for you. Naturally, it's perfect for live performance.

Image-Line's PC-only FL Studio - formerly called FruityLoops - is often cited as a beginner's app, but this is misleading. You can get very deep with it, but its approach to track-building is quite different to other apps, and this seems to 'click' with newcomers to computer music. It has an extensive range of instruments and effects that are particularly suited to electronic music styles. However, its audio recording side is less well developed and it lacks plug-in latency compensation and track freezing.

Propellerhead Software's Reason is perhaps the most unique DAW in that it's self-contained - it can't load third-party VST/AU plug-ins. The advantage is a unified interface and increased stability. It's aimed at electronic music production, but if recording is more your thing, Propellerhead has another app, Record, that can optionally integrate seamlessly with Reason to provide a complete audio/MIDI experience. Record boasts splendid real-time timestretching, an SSL-modelled mixer and Line 6 guitar effects. You can also use Reason with a DAW like Cubase via ReWire (many producers also ReWire Live).

Many DAWs are available in more affordable cutdown versions too, with an upgrade path to the full thing. There are typically restrictions on things like the number of tracks and effects with these, but the limitations are usually quite fair. The only one we'd warn about is Ableton Live Intro, which allows 12 Ableton effects and six VST/AU effects per project - fine for a basic live performance or DJ session but restrictive for production work.

Get MusicRadar straight to your inbox: Sign up for the free weekly newsletter...