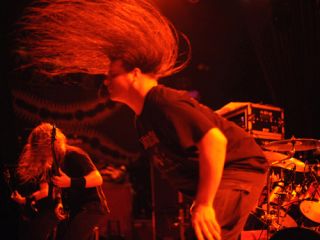 Metal wouldn't be metal without its over-the-top tendencies, and it's this ferocious desire to push the boundaries that's seen it evolve from a hard-edged offshoot of '60s rock into scores of subgenres. Death metal is only one of them, but you could write an entire book on its evolution (indeed, there is one: Albert Mudrian's Choosing Death), so what follows is a rapid-fire history that's as brutal and to-the-point as a BC Rich to the bonce.

Still, with the axe-men from Cannibal Corpse, Deicide, Obituary and Carcass all queuing up to spill their guts, you'd best know your death metal onions, lest they turn the blades on you.

Trevor Peres, guitarist with classic groovy death metallers Obituary, recalls: "Down in Florida, people were listening to Nasty Savage and Savatage as well as shredders like Randy Rhoads before the really heavy stuff started with bands like Celtic Frost, Slayer, Hellhammer and Venom."

In 1986, Slayer's Reign In Blood shocked 'em all with blinding kick drum-work and speedy picking - both vital components of death metal. Meanwhile, unsigned grindcore band Repulsion recorded their debut album, which was saturated with two other death metal staples: blastbeats and gore-laden vocals.

One problem: the record was so extreme that no label would touch it, making it strictly for tape-trading die-hards. Notable fans included UK grinders like Napalm Death and Carcass.

A whole festering scene was taking root in Florida. Peres explains: "The other big Florida bands were Deicide, Morbid Angel and Death. We were all doing the same thing and didn't realise it. We were probably in competition, subconsciously. Next thing you know, you got a whole scene…"

Minor mainstream success ensued for the Florida lot: the Cannibal lads had a couple of smashers with albums Tomb Of The Mutilated and The Bleeding; while Obituary followed their opening salvo of Slowly We Rot with Cause Of Death and the big-selling The End Complete; and Deicide's eponymous debut in 1990 delighted blasphemy-hungry metallers, as did '92's furiously technical follow-up, Legion.

In the UK, Carcass had matured considerably since their grindcore beginnings, unleashing the surprisingly melodic Heartwork in 1993. In the same year, Morbid Angel released their immortal masterpiece, Covenant. This brush with popularity led to bad publicity, mainly due to Cannibal's grim aesthetics and the Satanic stance of Deicide, whose fiery frontman Glen Benton had an inverted cross branded into his forehead (check it out above)!

The embarrassing misconception that all death metallers were sick-minded, suicide-obsessed devil-worshippers took hold, and the genre was often confused with the (quite different) Norwegian black metal scene, where church-burnings, suicide and murder had occurred.

In reality, death metallers are like any other rockers. There are some Satanic acts, but this is often more of a metaphor for inner strength and a reaction against Christianity. As for the unrelenting gore and death, would you brand someone a nutter for reading horror books or watching grisly movies? Thought not.

Today, death metal is recognised as exhilarating, challenging music that offers guitarists huge opportunities for expression. One of the most technically accomplished guitarists of the genre is Ralph Santolla, formerly of Deicide and currently plying his trade with Obituary: "It's not just about technique," notes Santolla, whose trademark is his melodic soloing style.

"Anybody can practise for 10 hours a day - that takes discipline, not talent. What impresses me is when people take that technique and make great music with it. For example, Alexi and Roope from Children Of Bodom are a huge inspiration to me. The Deicide album The Stench Of Redemption [2006] got a lot of attention for my guitar playing, but I never would have played that stuff if it hadn't been for touring with those two guys when I was in Iced Earth."

"Watching them play took me back to the sweeping and fast alternate picking that I had let fall by the wayside. I was doing more legato, big interval stuff, but I realised you could do what they were doing and make it sound super-cool.

Cannibal Corpse guitarists Pat O'Brien and Rob Barrett can rival anyone on the scene for picking accuracy and speed. "A lot of it has to do with picking," reckons Pat. "You can get your picking precision tight by practising scales. A really good place to go is the Guitar Grimoire book series - they have every scale and mode in them. Going up and down the scales in groups of three or four notes works for me."

"Instructional material from people like Vinnie Moore and Paul Gilbert will give you a different perspective; study as much as you can and then add your own take on it."

Songwriting is crucial, of course, and one reason Cannibal Corpse sell so many albums is that they write groove-filled riffs that stick in your head, often with razor-sharp pinched harmonics. "It's just a matter of angling your pick and pinching it," explains O'Brien, "and then you need the right kind of distortion to make it come out."

"Rob and I use Boss Metal Zone distortion pedals. The distortion's backed off a bit, just to add to the gain on the amp and give it an extra edge. We both use Mesa/Boogie [Triple/Dual] Rectifiers and the guitars have EMG 81s."

Obituary's Peres (pictured above) favours a more traditional rig. "I play a Strat; not many people play those in death metal. It has a humbucker and a Floyd Rose so I can dive-bomb and stay in tune, and I always use a passive pickup. If you know what you're doing, you can make it sound heavy. I turn the tone button all the way down and roll off the mids, and there's my sound."

"I use a Marshall JCM 800 (yes, the Ritchie Blackmore setup!) plus a Pro Co Rat distortion [pedal] and some noise reduction, and that's it."

Michael Amott is an important figure in the metal scene, and while many will know him for his work with Arch Enemy, it's with the legendary Carcass that he made his name. "I started listening to death metal when I was 11 years old!" Amott says. "It's a part of me: riffing at 200bpm in a low tuning with a tight rhythm-picking hand is in my blood."

Ralph Santolla recognises the band's contribution to the death metal genre: "Carcass were so far ahead of their time when it came to making crushing music, but making it melodic with a groove. So many bands these days are trying to remake Heartwork."

Following the early-'90s boom, fresh talent reinvigorated the scene for the new millennium.

The timeless titans of death metal remained as revered as ever, but further 'outside' influences would filter in, leading to diverse acts like Nile, Cryptopsy, Krisiun, Mithras, Origin and Dying Fetus. Detuned guitars were now the norm, with some acts using 7-string guitars, as popularised by Morbid Angel.

And if you'd like to slaughter the strings like Carcass (pictured above), Corpse and co? Michael Amott laughs: "Throw away your Guitar Hero console and practise every day!"

Liked this? Now read: The 50 Greatest Heavy Metal Albums Of All Time