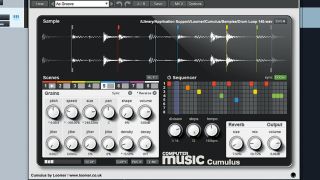 Back in the '60s and '70s, when the first digital recordings were made, they were named after they way they worked - 'sampling' an analogue input thousands of times a second to build up a series of discrete digital values that could be stored and played back in a potentially much more versatile manner than analogue tape was capable of.

Nowadays, with practically all our recording done digitally, sampling doesn't seem like quite such a clever trick, but it's still a technique that has an astonishing amount of creative potential.

With these 11 sampling tips, we aim to help you unlock much of that potential within your own projects. From the simply practical to the creatively inspirational, there's something here for every samplist, no matter what their level of experience.

Late 80s and early 90s hardware samplers would sample and process audio at low bit depths, giving sounds a distinctive 'lo-fi' characteristic. To achieve this retro 'sampled' tone over a cleaner sound source, simply apply careful bitcrushing to add that distinctive fuzz of an old-school hardware sampler to your sounds. You can even get dedicated sampler plugins, such as 112dB's Morgana or Sonic Charge's Cyclone, that go to great lengths to emulate the crusty old-school flavour of vintage samplers.

Speaking of retro samplers, the distinctive 'cyclic' timestretch algorithm from old-school Akai samplers is still a distinctive and sought-after effect today. To replicate this rave-tastic stretching, download Akaizer for PC or Mac. Now you can emulate the classic 90s metallic stretching effect for f-f-free-e-e-e-eeee!

A true crate digger is committed to the sampling cause, so be ready to sample anything and everything at the touch of a button. It's a good idea to have your sample-ripping method of choice set up permanently, so you can capture that perfect movie quote or orchestral segment as soon as you hear it.

Transpose, transpose, transpose! A sampler makes it easy to pitch your sounds up and down, so it's worth trying out samples in different keys. Drum hits can fit nicely in a track when pitched up or down by a few semitones. Don't be afraid to pitch sounds by one or two octaves (or more) - you might create some crazy drones or special FX.

Most samplers offer a reverse function enabling you to play your samples backwards. Try reversing all manner of sounds for great results - drums, pads, basses, synths, FX and even vocals can all sound great played back-to-front.

Set up some wild modulation, effects or filtering in your sampler before using the browse buttons to scan through your samples. It's likely you'll stumble across an unusual sound or effect that you wouldn't usually think to process or modulate in that way. You can even set up dedicated folders full of unusual samples ready for creative scanning!

If you have a sample of a major chord, and you want to use it in a minor context, play three notes up from the root note (played by the bass) to form a minor seventh chord.

When collecting samples, run them through Mixed In Key, a DJ software application that labels sounds by their musical key. This makes life easier when searching for samples in the same key as the track you want to use them in.

Modern samplers make it easy for you to modulate their parameters, and unique results can be generated this way, especially when a random, unpredictable element is involved. You could automate the parameters randomly in your DAW, or try hooking your sampler's start point up to an LFO or envelope for some distinctive glitchiness.

Loomer's Cumulus is a creative granular sampler in Computer Music's CM Plugins suite (free with every issue), but if you'd rather use another plugin, it's easy to perform granular tricks using any sampler - simply set a short loop point around any sample until you get a buzzing tone, then tune this tone using the usual methods. You can now play the sound across the keyboard! If possible, try modulating the sample start and loop points, too.

Don't forget to include the key of every sample in its file name, and BPM values in the names of loops. This will save time later when you want to quickly throw the sound into a track and get it working in the context of a composition.

For much, much more on the art of sampling, from basic audio editing to building full-on multisampled instruments, be sure to get your hooks into theSeptember issue of Computer Music (207).