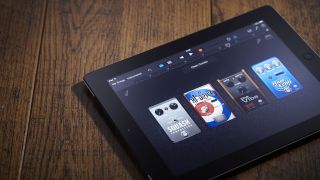 Apple's iPad is firmly established and lends itself to being an ideal recording and practice tool for guitarists. Here's what you need to know about using it with amp simulators...

Okay, what is an amp sim?

It's a digital simulation of the sound you'd get playing through a guitar amp with a mic'd cabinet. Many guitarists were introduced to the world of amp simulation by hardware such as the Line 6 POD and software such as IK Multimedia's AmpliTube and Native Instruments' Guitar Rig, running on a computer.

The iPad was the most recent platform to adopt this type of technology, and there are loads of amp sim apps available, allowing an iPad or iPhone to function as a portable practice aid, or even for live performances. Apps are generally inexpensive and many are expandable via in-app purchases of more amps, etc.

How do I plug in and get any sound out?

You'll need an audio interface that is compatible with your particular model of iPad - there are several portable models built specifically for guitar. These usually plug into the 30-pin port on older models or the Lightning port on newer ones. There are some that can plug into the headphone socket, but the quality is not as good.

Other USB audio interfaces can be plugged into an iPad if you have an adaptor, such as Apple's Camera Connection Kit. Some interfaces will have a headphone output, but you generally monitor through the iPad's headphone output or speaker.

Can I change patches and switch effects while playing?

Switching presets and manually controlling parameters is quite possible with some apps, possibly opening up the way for live use. It's done by MIDI and you'll need an iOS-compatible MIDI controller such as IK Multimedia's iRig BlueBoard footswitch, which works via a Bluetooth connection.

Some apps have integrated recording facilities, but you can also integrate amp sim apps with an iPad-based digital audio workstation (DAW) using Inter-App Audio (IAA), which allows you to connect the output from one app to the input of another.

Audiobus is a third-party app that allows for real-time audio routing between apps - you can connect your Audiobus-compatible music apps together.

But what if I have an Android device?

Android is at a disadvantage when it comes to hosting apps of this nature, but there have been developments lately! Check out the iRig UA, designed to work on 'all Android devices' and launched at NAMM 2015.

Check out some of the iPad amp sims we've reviewed...