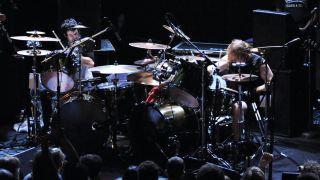 Crover and Willis in double-drumming action

Last year, you voted Crover and Willis's work on 'Talking Horse' one of the top 20 drum beats since 2000. Here the dynamic duo reveal the foundations of their work

Dale Crover: “I advise you not to do it. We´ve already done it, you can´t get any better than us! No, I´m joking. It´s odd that people think it is so strange and hard. It´s not that hard. I always thought of it like playing with another guitar player. You have two guitar players in your band, you have two drummers.”

Coady Willis: “Depending on where we´re playing and space restrictions we set up differently. We might set up face to face or separate from each other, it´s always changing.”

Dale: “For some reason it doesn´t fit the rock´n´roll band mould. But the bands that do it are great. One of the bands that influenced us are the Swans, they always had this brutal, pounding, two drummer attack. They were a big influence and so were the Butthole Surfers, even though they were different because their drummers were stand-up drummers. The Allman Brothers as well, of course.”

Dale: “Coady and I have been playing for six or seven years and we really feel comfortable, we´ve got it down. It worked right away but we were more careful about what we were doing. Now, we´re comfortable enough so that we don´t have to say, ‘What are you doing there?´ He does his thing, I do mine.”

5. Have the other guy´s back

Coady: “We compensate for each other. I know where he´s at so if something goes wrong we know what went wrong and we´re able to compensate and recover. That goes for all the other guys in the band too. Everybody knows where everybody else is at.”