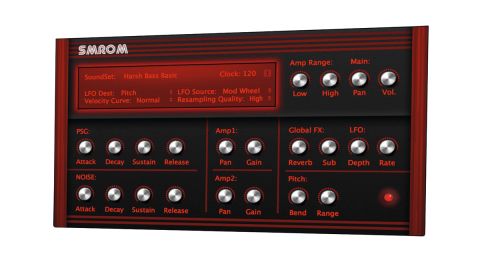 A great buy for chiptune fans, retro fetishists and anyone else with an interest in early console sounds.

The multisampled source of SMROM's sounds is the Texas Instruments SN76489 PSG (programmable sound generator), as used in the Sega Master System console of the mid-80s, and demanding 800MB of hard disk space. 45 patches have been captured, ranging from basses, leads and 'organs' to arps (locked at 120bpm, alas) and FX.

As you'd expect, there's not a huge amount of programmability on offer. The main sampled sound can be mixed with a noise oscillator, and each has its own ADSR envelope, Pan and Gain controls.

There's also a handy slaved sub oscillator for extending the bottom end, and a sine wave LFO (unsyncable) that can be pointed at the Pitch, Expression (amplitude) and Pan parameters. A 'depth-only' reverb completes the picture.