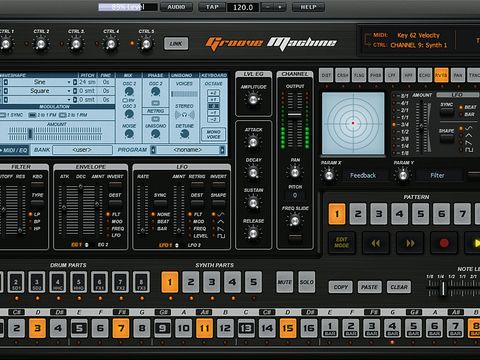 You'll have great fun with Groove Machine, but it has too many limitations to be your primary music-making tool.

For a generation of producers who have grown up with DAWs, it's hard to imagine a time when you couldn't download the exact same tools that your idols use and get busy with them in your own productions.

But back in the '90s, each piece of kit cost hundreds or even thousands of pounds, so the all-in-one "groovebox" units from the likes of Roland were an attractive way of getting started.

They offered drums, synths, sampling (eventually) and step-sequencing that was popularised by classic 80s machines. In reality, though, none of the tracks you bought or heard in the club were made on grooveboxes - their digital sounds, processing and mixing simply did not sound good enough back then.

However, now that we find ourselves in a world of super-fast computer processing, perhaps it's time to revisit the concept? It seems that Image-Line thinks so…

Let's talk about drums first. Each of the four sample layers can be edited, offset, reversed, filtered and have envelope controls applied independently, making this a pretty formidable tool. The samples are fairly good, with some characterful examples reminiscent of another Image-Line plug-in, the excellent Drumaxx.

Next come the synths, and this is where we start to feel some traditional groovebox limitations. Despite a large range of waveforms and a healthy supply of presets to showcase them, the sounds just don't have any real balls or bite.

You can make some uninspiring trance or passable pop-progressive house, but when it comes to the kind of driving filth that permeates almost every contemporary electronic genre, Groove Machine is lacking. This is a shame, as the unit makes LFO-driven dubsteppy wuh-wuh-wobbles a breeze to program.

As for the effects, they're great. All 10 performance effects are fun and very usable, and the slicing and reversing tools are so uniformly excellent that we actually found ourselves loading in sliced loops of tracks, just so we could use its performance tools to create glitch edits.

The fantastic sidechaining effect, panner and some brilliant LFO-driven filters are also highlights. Image-Line has really missed a trick by not offering an effects-only version of the plug-in, however.

Out of the groove

In times gone by, the measure of a groovebox was its built-in sounds, but as soon as you could throw sampling into the mix, the interface and tools became more important.

Groove Machine certainly offers sampling - and acquits itself quite well in this respect - but in any plug-in of this type, the battery of included sounds is still very important. Unfortunately, in respect of the sample-based patches and other presets, Groove Machine is amixed bag.

If you make progressive-sounding genres, there are plenty of cool sounds and grooves to get you going. Take a quick listen to any of the excellent presets by Toby Emerson and you will hear how nice Groove Machine can sound.

There are lots of useful, posh-sounding big-room percussive noises for pop and dance. The rest of the preset grooves show up the limitations; none of the dubstep, acid or supposedly ballsy synths quite make the grade.

There are some interesting and cool drum sounds, just as in sister instrument Drumaxx, but whereas that is a quirky drum machine playing a part in a broader sonic tapestry, Groove Machine is designed for producing entire grooves. Even when fully loaded with your own drum samples, the under-powered synths let Groove Machine down.

The positives return, though, with Groove Machine's sequencer. The great strength of grooveboxes, be they hardware or software, has always been the speed with which you can build up patterns. They lend themselves to quick jams, and you owe it to yourself to try one at least once.

Groove Machine isn't the only game in town, of course, with alternatives ranging from mobile device apps to the Native Instruments powerhouse that is Maschine, but we do think that Image-Line's effort offers one of the best such sequencers we've used.

From simple touches such as loop-recording or overdubbing (depending on the order you hit play and record) to easy access of individual bars within each pattern using the step-keys, it just makes us want to create tunes.

We're happy with the MIDI and performance controls, too. It's incredibly easy to assign MIDI controllers to any performance parameter, and there are five assignable controls within the interface that can be assigned to as many parameters as you wish - and to a MIDI controller too, of course.

So what's missing? Well, one thing we'd like tosee would be a dedicated output section with metering and master effects. Also, considering the fun and creativity to be had making grooves and the limitations of the onboard synths, it would be nice to be able to export MIDI files of the patterns you've made.

Groove Machine is a very specialised tool. If you miss the grooveboxes of old and have had your nostalgia fuelled by one of the new breed of iOS emulations, then part of you will love it.

If you've never tried one before, you will have at least a couple of hours of fun with Groove Machine before you get tired of jammin' around.

However, we think that very few will actually have the inclination and patience to regularly make grooves in Groove Machine and then render the parts for use in their DAW. Plus, the unforgivable lack of MIDI file export means that you can't even build a groove and then easily export the riffs to play them back via more chunky-sounding synths.

The overall oomph-light sound of the plug-in means that we probably wouldn't want to take it out on the road as a standalone live proposition, either.

So, we'd say this definitely constitutes a try-before-you-buy situation. Some people will love Groove Machine (to a point, we include ourselves in this category); some people will dismiss it as a toy; and most will have a couple of hours of old-school groovebox fun and then never touch it again.

With a few nudges in the right direction, though, Image-Line could make this into a much more serious proposition - we look forward to seeing how it develops.