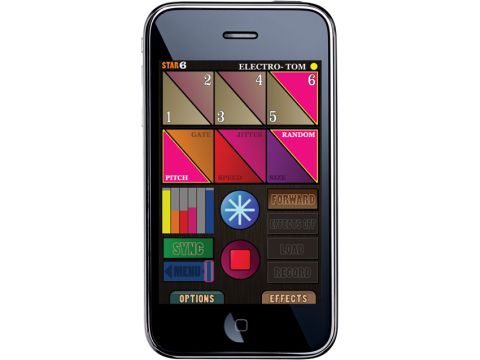 If you choose your loops carefully, Star6 is a fun distraction.

Star6 is an iPhone/iPod touch real-time effects processing tool for loops. You can upload your own to the device (with a 2MB limit on each sample) or use one of the bundled collections. The effects and loops are triggered by holding down the triangles in the top half of the screen - you then tilt the iPhone/Touch back and forth to manipulate whichever effect you're holding down.

This gives a surprisingly fine degree of control. The sound the effects make is dependent on the Sync/Grain button at the lower left. This either locks sample playback to a tempo defined by their length, or enables each effect to run free.

The best example of the difference between the two is found in the Gate effect. If Sync is enabled, it pulses the audio on or off at an interval related to the tempo of the loop. The following note values are selectable: whole beat, half beat, quarter beat, and setting under which the gate on time is gradually reduced until it's off completely. With Grain enabled, the gate is disconnected from the tempo of the loop, and the interval becomes random and glitchy.

The other effects include Pitch and Speed shifters, along with Jitter and Random effects that play slices in a variable order or at random pitches. Finally, the Size effect offers a somewhat unpredictable parameter that alters the length of each slice. A further three effects - delay, filter and distortion - can be added to the audio stream, but these aren't controllable via the accelerometer.

The GUI could do with a bit of a reshuffle and some might feel that the application is a little overpriced for what it offers. We'd also like the ability to sequence loops, so that one can start after another finishes.