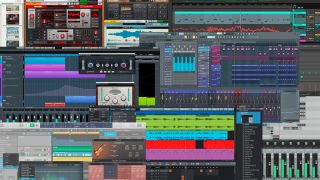 UPDATE: The results of the best DAW poll will be coming in January 2020. Apologies for the delay!

Yes, it’s time for MusicRadar’s annual search for the best digital audio workstation - the music production software that towers over all others.

You might argue that this is nothing more than a popularity contest, but everyone has a reason for picking one DAW over all others - probably because they think it’s the best - so we’d say that it’s a pretty valid one.

The 25 best VST/AU plugin synths 2019: all the best soft synths you need in your DAW

Keen observers of the DAW market will note that it’s seen a fair few changes over the past 12 months. Cubase has hit version 10, and with the launch of the eleventh version of Reason, that software can now be used as a plugin. Thanks to the addition of The Grid, meanwhile, Bitwig Studio 3 is now a cutting-edge modular playground.

The point releases have come thick and fast, too. Ableton Live 10.1 has plenty to please the faithful, while FL Studio 20.5 includes Flex, a new synth. Studio One 4.5, is full over user-requested features, while Logic Pro X 10.4.5 brings significant performance benefits.

Which, though, is the current top DAW dog? We’ll let you answer that one by voting in the poll below, which runs until the end of October. We’ll bring you the results in November.