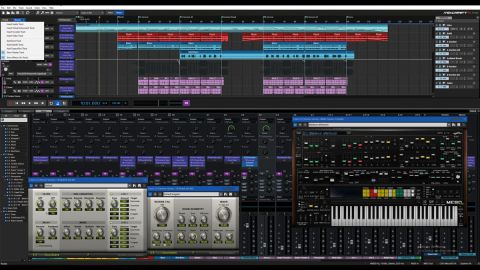 Mixcraft 9 Pro Studio feels like an app that could easily go toe-to-toe with DAWs twice its price, and v9 brings welcome additions.

Acoustica’s Mixcraft DAW is one of those quietly successful applications that doesn’t seem to blow its own trumpet, yet scores consistently well whenever it’s reviewed on these pages. In short, it does the job well, so doesn’t need to shout from the rooftops about it!

It might also not be on your radar because it’s a PC-only DAW, but if it is on your radar, you’ll know it comes packed with enough features to be a serious PC contender, and at just $199 for the top-end Pro Studio version on test here, it’s a bargain to boot. (There’s also a cut-down Recording Studio version at $99 that lacks the Celemony Melodyne integration, a lot of the included plugin instruments and effects and other features, so we think Pro Studio is well worth the extra 100 bucks.)

Mixcraft has always offered a welcoming music production environment with a claimed ‘great ease of use combined with raw power’, and it’s hard to argue with this. It’s a traditional DAW in the sense that tracks go top to bottom and arrangement flows left to right.

There’s a well-featured mixer where you expect it to be and the UI is very welcoming indeed and easy to interact with, so the workflow is almost second to none on this platform. These refinements and a series of pro features have come through regular updates over many years that have seen the software mature to its current ‘Pro Studio’ status, and its Computer Music scores have grown accordingly (from a not so great 6/10 for its debut to 9/10s from version 5 onwards).

This latest 9 Pro Studio version has a wealth of additions, like a new suite of plugin effects and instruments including Cherry Audio’s marvellous Voltage Modular Ignite, plus there are additional automation and mix features and the ability to detach and attach UI panels.

After buying, you’ll download the main 9 Pro installer (around 540MB) and unlock it with a serial code. You’ll also likely have to use a separate code and download to unlock the aforementioned Voltage Modular.

It’s a very easy process and the installer takes you through all of the extras so you’ll soon be up and running. What we’ve always loved about this DAW is the smooth resizing of Windows so the mixer, for example, invades your arrangement just to the level you wish, and track width and height adjustments, along with zooming, are all slick and precise.

The panel detachment feature is new to v9 – you could only do it with the lower panel in v8 – and it adds a great level of customisation to how the software is laid out, and you will want to use it, as taken as one block, Mixcraft can initially feel daunting. However, once you get into it, this feeling soon passes; loading instruments and effects, resizing, and customising all become second nature.

So to the newcomers and Cherry Audio’s modular synth system needs no introduction to regular readers as a version of it is featured in the Plugin Suite. Here you get 45 software modules – including oscillators, effects and arpeggiator – so you can quickly experience the joys of hardware modular synthesis in your DAW.

The new TB bundle of multi effects (including MultiFX, Reverb, Parametric EQ, BusCompressor, Barricade, De-esser and Compressor), is, of course, welcome but finds itself in a crowded field that already includes Mastering Essentials from iZotope and dozens of other mixing and creative effects that are very good indeed.

However, the new additions mean that the library covers just about every mixing and mastering function you could wish for – this side of Mixcraft really is very well featured indeed. Back to more instrumental plugins and Acoustica Vocoder allows you to get some robot vocal action into your music; not essential, you might say, but useful for some genres.

Perhaps more welcome is the additional functionality within the mixer – with new Gain, Drive, Compressor and other effects as standard along the channel strip – plus the automation features which allow curved, tempo and pitch automation and are very easy to implement and offer some excellent and precise control (not to mention optional LFO control) over your mix movement and evolution.

Mixcraft 9 Pro Studio might have only had a single-figure number of improvements and additions, but they are all pretty major ones. We love Cherry Audio’s Voltage Modular, but really you should be upgrading for features like the new suite of plugins and the additional workflow enhancements.

These really do add a pro sheen to an already pretty slick environment (and upgrades from v8 Pro or Recording cost from just $29 to $99).

• Image-Line FL Studio 20
A DAW with some neat compositional features built in and again, great value.

As to whether you should take the leap from your existing DAW, that is always the harder question to answer. Certainly just shy of 200 bucks (and actually on offer at just $149 as we write this) is a great price to pay for such an extensive feature set and friction-free workflow.

It runs slickly on a PC, and offers this smooth music-making experience with enough extras – including a large and well-implemented sound library – to help you make pretty much any genre of music you could wish for.

The only question is: are you brave enough to close one DAW to open another? Certainly Mixcraft will feel like a familiar change, no matter what your existing platform, and it punches right up there with the best of them.

"Each track now has its own built-in gain, compressor, and drive. What has attracted most of my attention is the handy 'one-knob' compressor for taming transients. At lower settings, it works especially well for vocals, guitars, and bass, and great crushing drum loops at higher settings."
ProducerSpot