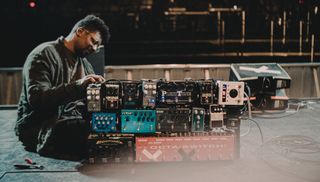 Tosin Abasi is one of greatest guitarists of our generation – and he's proven himself a forward-thinker on the gear front with Ibanez, and now his own Abasi Concepts. So when we heard he's having a clearout and selling a hoard from his collection on Reverb we knew they'd be some interesting items from his career – and there is. Big time.

Some of the pieces are integral to Abasi's story so far; with the highlight being the Ibanez TAM100 8-String Guitar that was a key part of the to the writing and recording of Animals As Leaders’ 2014 album The Joy of Motion as well as on tour to support the same album. “This was one of my main touring and recording guitars,” Abasi said. “It just has a ton of mojo.”

Equally as exciting for fans will be the Fractal AxeFX II XL modeller and multi-effects unit that was Abasi’s main rig for writing, recording, and touring Animals As Leaders' debut album The Joy of Motion. “It contains the exact album and stage tones I used as well as some personal patches,” notes the guitarist.

And if players miss out on that they can still snag Abasi's personal presets from his Fractal Audio AX8 Amp Modeller & Effect Processor. “This unit was used for international touring and clinics for The Joy of Motion and The Madness of Many tour cycles as well as with Generation Axe with Steve Vai, Yngwie Malmsteen, Zakk Wylde, Nuno Bettencourt, and more.”

A Strandberg Boden 8-String Guitar used extensively for the recording of Animals As Leaders’ 2016 album The Madness of Many is also included in the sale. “The multi-scale wenge neck, flamed-maple top, true-temperament frets, and Lungren pickups makes this one of the best-spec’d Strandbergs around,” says Abasi.

Another notable guitar is the Ibanez Custom Shop Prestige 8-String that Abasi commissioned especially from the Ibanez LA Custom Shop nearly 10 years ago. “I wanted to recreate an almost classic look," he explains. "It has really focused note quality and looks badass as well. “This guitar actually became the template for my signature guitar that came shortly afterward."

There's more custom beauties to be to be bought too including a Mayones Custom Regius 8-String Guitar Abasi had built by the Polish company to replace a stolen guitar. "[Mayones owner] Dawid [Dziewulski] and the guys at Mayones have always been great to me," says Abasi.

Interview: Tosin Abasi on The Joy Of Motion

"The quality of the buckeye burl is fantastic. The red Bare Knuckle pickups in this are a great touch and sound fantastic. It even has a removable ramp for fingerstyle players. This is about as custom as it gets."

The Tosin Abasi Reverb shop will launch on February 26. To see more gear from the sale previewed head to reverb.com