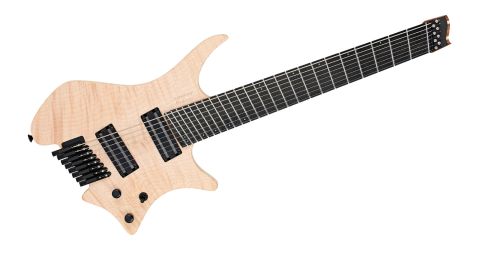 If you're serious about eight-string instruments this is one of the most innovative and intuitive designs out there.

Seven, eight and even nine-string guitars are becoming more and more widespread. Often mistakenly perceived as a novelty, these guitars are fast becoming a mainstay in the realm of progressive metal.

A company that has catered to the prog-metal community for quite some time is Strandberg, based in Uppsala, Sweden, whose impressive user base includes Periphery's Misha Mansoor and Animals As Leaders' Tosin Abasi, and the Boden 8 reviewed here has its specs taken from the made-to-measure Strandbergs of those very two players.

Visually, the vast majority of us guitarists will be taken aback by the space-age appearance, including fanned frets, no headstock, and the strikingly unusual body shape.

Yet perhaps the most unsettling feature aspect of all occurs when flipping over the guitar to reveal the trademarked 'EndurNeck': a neck that has a back surface made up of three intertwining flat surfaces instead of a round profile.

So, when your fretting hand is in a position where the first finger needs support, such as the higher end of the neck, you'll find the appropriate girth underneath to provide it, and vice versa for the thumb at the lower end of the neck.

After playing it, you'll soon realise it makes perfect sense, and enhances playability on an already challenging eight-string.

Those who have dabbled in lower tunings will already appreciate that the greater the scale length, the better the tension and intonation of the lower strings. Because the scale length is increased from high to low, the frets fan out, too.

There are numerous pickup options available when custom- ordering a Boden 8, and our review model has Lace Aluma X-Bars installed.

We find them just a tad underpowered for immediately capturing that progressive metal sound that this type of guitar demands, but after a few amp tweaks, we've got a very well balanced sound, with enough power to project ultra-low riffs without overpowering higher strings.

However unsettling the appearance of the guitar, rest assured that every seemingly radical feature is a triumph for function over 'style', and none more so than the unique EndurNeck neck, which really is an ingenious feat of design.

While the thought of a non-elliptical neck shape will be horrifying to most of us, it's precisely on such a wide neck that this system offers some serious benefits.

For players who creatively demand the sonic benefits of an eight-string instrument, but are perhaps still feeling apprehensive about swapping to a much wider neck, the radical, innovative Boden 8 may prove to be the ultimate platform to finally make the transition.