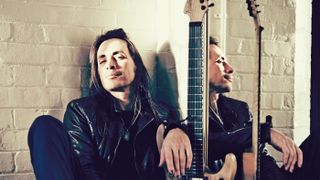 Got my first real six-string

"I come from a big family of musicians, so I was lucky enough to grow up with guitars all around the house. Even though I didn't really know much at the time, my brother had a Les Paul Goldtop and my dad always had this Fender or some bizarre Pedulla-Orsini guitar.

"As for the first guitar I actually bought, I believe it was a Cherry Red Kramer! I think I bought it because Eddie Van Halen played Kramer and I remember it had a Rockinger tremolo on it."

"Learn the drums. While you're learning guitar, figure out the drums too. Not only does it help you have great timing, but it helps you understand how a band works.

"When people play ahead, there's something really not sexy about that. Being a drummer will help you understand that, as well as how keyboards, vocals and melodies all fit together. Understanding that stuff can open a whole other world of guitar playing."

The show must go on

"I give up a good percentage of my guitar playing for performance, so ever since we started recording shows, I haven't been able to listen to them! People are like, 'What's wrong with you? It sounds great!' but I always think, 'I gotta tone it down and play guitar more!'"

Down down deeper and down

"I was playing a gig with Extreme in Oklahoma and my tech handed me a guitar half a step down from everyone else. We kept playing because we were in the moment - you don't know who's in the wrong key or what's going down. And that is the nightmare, a whole song without knowing who's in the wrong key."

"The toughest time is when the band broke up. I left Extreme in the mid-90s and did some solo stuff , which is great.

"I was too young to know instead of quitting a band, you leave it for a while. You go on a vacation. We did four tours straight and we'd break up if someone opened the curtain the wrong way. To be honest, we just needed to get away from each other and nobody told us that."

You don't know me at all

"The hardcore fan knows your catalogue, not just More Than Words or whatever. I think the misconception was from the other side, the people that were more into the hits. They had no idea what the band was about. Sometimes that was frustrating.

"People would tell me they were my biggest fan but couldn't name a song off our third album. It's great to reach that audience - they buy your albums too, but it did feel like a misconception."

"There is nothing wrong about being a rock 'n' roll guitar player. If someone tells you there is, then they are fucked. Until you become a singer, you don't realise how lucky you are to play guitar.

"Singers have an instrument you can't completely control. You don't sleep, you're fucked! Guitar players can get drunk before they go on and still look cool trying not to fall over. It's hard not to be cool as a guitar player! Travelling and doing all the other stuff … who cares?! That's part of getting somewhere. Being a singer is hell, I've done it on my solo tours, it's absolute hell."

Pornograffitti Live 25: Metal Meltdown is out now on Blu-ray, DVD and CD.