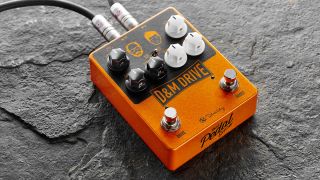 Given the sheer number of stompboxes on the market, finding the best overdrive pedal for you isn't easy. At their core, though, they all set out to achieve the same goal: to simulate the sound of a valve amp running at ear-splitting volumes, minus the tinnitus.

Overdrive pedals can also be used to boost an already cooking amp into further levels of saturation, or even other dirt pedals in a process known as 'stacking'.

Most overdrive pedals also serve up a handy mid-frequency hump, as evidenced by the esteemed likes of Stevie Ray Vaughan, who used an Ibanez Tube Screamer to help his Fender combos cut through a band mix.

Ahead, you'll find our pick of the best drive pedals available today, from basic three-knob mini pedals to all-encompassing channel-switching beasts, spanning a range of gain levels in between.

Whatever genre you play, we're here to help you answer the question, "What's the best overdrive pedal for my playing style?"

The OCD has a reputation as one of the best stack-in-a-stompbox overdrive pedals. The rich harmonics and responsive controls make it a great overdrive for capturing that hallowed classic-rock sound of an amp pushed to 11, while its HP/LP switch affords it considerable versatility. 12 years on from its initial release, Fulltone released a fully-fledged V2, which packs an output buffer, which stops the pedal from being influenced by stompboxes before or after it; a Class A configured discrete 2N5457 JFET input section, which raises input impedance and increases dynamics; plus an internal switch to change between Enhanced Bypass and true bypass.

The adorable TS Mini is made in Japan and packs the TS808's coveted JRC4558D IC chip. You know what to expect from a TS, and the Mini will get your mids humping and your single coils beefing up with the best of 'em. It's not the smoothest Screamer we've ever heard, but it is faithful to the '80s incarnation in that it compresses up a treat and cuts the low-end a little. Ramp up your amp, cut the TS Mini's gain and up the volume, and it gives distorted tones extra attack - and that's possibly its greatest strength.

An affordable Klon clone that covers a lot of ground

The Soul Food is EHX's take on the transparent overdrive of the Klon Centaur, and an excellent complement to a valve amp. The Klon is beyond the means of most of us, but if you're looking for that type of touch-sensitive, transparent overdrive and boost that keeps your core sound intact, the Soul Food delivers it, with a small bump in the low-mids and a range of gain from clean boost up to mid-range drive.

They say you get what you pay for, and with Strymon pedals that seems to ring true. Anticipating seemingly every user need, the Sunset not only has three distortion options with different topologies, but also three boost options and flexible routing that allows for either boost or drive first. The two-stage drive cascaded into the ‘Texas’, the company’s take on a Tube Screamer, which is particularly powerful... and fun. When compared side by side with a real tube high-gain amplifier, it’s hard to tell which is real and which is the pedal - there’s certainly not even a whisker of dreaded digital ‘fizz’.

A flexible drive and boost combo from That Pedal Show

That Pedal Show's Mick Taylor Daniel Steinhardt's signature pedal with Keeley Electronics is a dual-format design featuring overdrive and boost sections that can be used individually or stacked - with the option of putting the boost before or after the drive. Extra flexibility comes from input and output jacks that will take TRS cables to allow the two circuits to be split, so each can be used in a different loop of a switching system, effectively having two standalone pedals. Stacking the two sections together offers more opportunity - both routing options have their relative merits, but we really like the way that the Boost before the Drive ups the saturation quota.

It can be a hard stompbox to come by, but the Timmy remains one of the definitive low-gain overdrive pedals. Its sheer transparency enables it to act as a gain enhancer for your existing guitar and amp, while retaining their essential character. There's minimal EQ shaping, aside from what you as a player set out to achieve using the onboard bass and treble knobs, and it stacks beautifully with other gain pedals to boot. If you absolutely have to retain your core tone, the Timmy remains the obvious choice.

Just about every boutique pedal maker turns out some sort of Tube Screamer clone, but EarthQuaker has taken a radical approach to the task. While the company may have based its Palisades on the classic TS808, it's built into it a larger array of options than we've so far seen in any overdrive pedal. There's a choice of six clipping voices and five different bandwidth settings (via a pair of rotary switches): 30 variations on the character of the effect before you even start to tweak! The result is a pedal that lets you dial in a massive range of overdrive tones - not just good impersonations of TS pedals, but much gainier drives verging on distortion and fuzz, as well as transparent boost/overdrive.

An old favourite, the BD-2 is fantastic for just boosting an amplifier that’s working and giving it a little bit more edge. But it’s definitely an overdrive pedal, not a clean boost, because a certain amount of that drive tone is being created in the pedal itself. It’s very warm and very natural. Strat players often get on well with the Blues Driver, because the pedal tends to gently balance out the Strat’s toppy sound. It takes the spirit of Boss's much-loved OD-1 and SD-1, but adds gain, edge and bite to emulate a cooking valve amplifier. The Blues Driver responds well to picking dynamics, too.

The Brothers' 100 per cent analogue signal path comprises two independent channels: ‘A’ based on JFET circuitry and ‘B’, which is IC-based. Each of these can be set to deliver Boost, Drive or Fuzz. The pedal's digital brain determines how those two channels can be combined: there are 33 different ways, all of which can be saved (along with knob positions) as presets. Besides choosing which of the three effects each channel delivers, you have the routing options of channel A driving channel B, channel B driving channel A or both channels mixed in parallel. The different circuits of the two channels offer contrasting takes on boost, drive and fuzz that are sufficiently different to provide real tonal choice but also complement each other extremely well when it comes to setting up blends.

The most versatile overdrive pedal on the market

With the RevivalDrive, Origin Effects aimed t delivering the sound and circuit behaviour of a classic amp in a fully variable and controllable format. The resulting dual-channel pedal has one bypass footswitch and a second to toggle between the channels. Each have an identical set of controls but while one channel is based on a valve rectifier, the other has a solid-state (Silicon) rectifier for the different responses associated with each. The two channels are sufficiently different, the Silicon channel having a tighter, more aggressive feel to the squishier sag of the Valve channel. With an ability to mimic a whole range of amps, notably Marshall and Fender models, or provide overdrive that’s perfectly tailored to be an extension of your clean amp tone, it will give you a proper cranked vintage amp sound at practical stage and home levels whatever amp you are using.