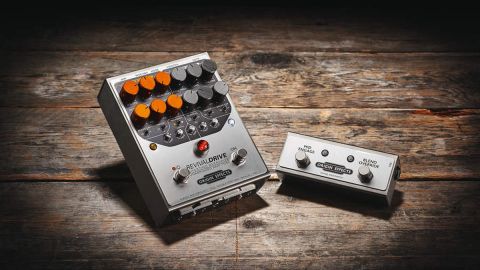 When Origin Effects designer Simon Keats put his mind to making a guitar compressor he smashed it with the Cali 76 and SlideRig family, which have ended up on the ’boards of many pro players including David Gilmour and Pete Townshend.

The RevivalDRIVE aims to do the same trick for overdrive and is based on the idea that the ultimate overdriven tone comes from a non-master volume valve amp turned up loud. To that end, Origin Effects analysed a range of classic amps, both British and American, to recreate the entire signal path using all-analogue components that would work in a pedal (substituting discrete transistor-based circuitry for valves), with the aim of delivering the sound and circuit behaviour of a classic amp in a fully variable and controllable format.

The resulting dual-channel pedal has one bypass footswitch and a second to toggle between the channels. Each have an identical set of controls but while one channel is based on a valve rectifier, the other has a solid-state (Silicon) rectifier for the different responses associated with each.

There is also a range of EQ adjustment features designed to match the pedal to the amp it’s plugged into, including flat-response power amps. These post-EQ features are expanded beyond the standard pedal in the RevivalDrive Custom we have, with an extra front panel to deliver even greater flexibility in amp matching.

Immaculately built, the RevivalDrive Custom has far more knobbage and switchage than we’ve seen on just about any drive pedal. The two channels are sufficiently different, the Silicon channel having a tighter, more aggressive feel to the squishier sag of the Valve channel - note you can actually have two Silicon channels if you prefer via a rear panel DIP switch.

Of the six knobs, the Volume (Gain) and Output are pretty standard, while Blend allows you to roll back from the fully overdriven sound to add in some dry sound for clarity, but the other three knobs address various intriguing aspects of amp behaviour. Lows mimics the way low frequencies can drive a power amp to distort more - you can exploit this for a thicker sound or roll it back for leaner and cleaner. More/Pres controls negative feedback as used in the output or power stage of some amplifiers.

To the left things get a little more untamed with early onset of distortion, while to the right it’s familiar top-end presence boost. Ghost addresses the phenomenon of low-frequency notes occurring within vintage amp circuitry, underneath those you’re actually fretting - something heard more when soloing up the neck. It’s a cool effect that adds an extra dimension to notes when you find the sweet spot.

Besides the knobs you get a pair of three-way voicing switches, Bright Cap and Preamp with US (Fender) and GB (Marshall) tone-shaping options, while another section offers level and frequency knobs for a mid-range boost, assigned to either channel or an optional dual footswitch, which can also override the Blend knob so you can switch between a fully driven sound and one with a proportion of the dry sound in it.

Plugged in with the Re-Amp EQ dialled-in to match the darkness/ brightness of your amp, the pedal can run the range from clean to fully cranked amp, all with wonderful touch sensitivity and volume knob cleanup. This is really organic tone reminiscent of amps from the '50s through the '70s.

Preamp switch options that are based on a Fender Twin and a Marshall 1959 Super Lead show you where the pedal’s designer is coming from and he puts all the adjustment tools at your disposal to conjure up the flavours of many more classics with every degree of subtle sound shading you could wish for.

This is no ‘bish bash bosh and you’ve got a sound’ overdrive pedal: it’s a much more complex and nuanced proposition that begs careful adjustment but feels and sounds like playing through a sorted vintage amp.

With an ability to mimic a whole range of amps, notably Marshall and Fender models, or provide overdrive that’s perfectly tailored to be an extension of your clean amp tone, it will give you a proper cranked vintage amp sound at practical stage and home levels whatever amp you are using. And, with two channels plus the options provided by the supplementary footswitch, there’s plenty of onstage flexibility.