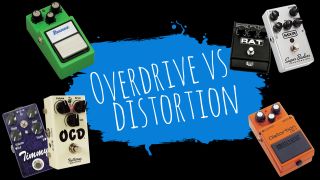 If you're playing rock guitar, chances are that at some point you're going to want to use overdrive or distortion effects. Saturated, gnarly guitar tones are synonymous with rock music, and every subgenre - from shoegaze to metal - has ushered in increasingly diverse types of distorted guitar sounds.

The reason distorted guitar sounds so good is because extra harmonic content is added to the signal, making it sound louder and more aggressive. From a technical standpoint, the original distortion - that of vacuum tubes running hot until they saturate - is a form of soft limiting, as the waveforms are clipped.

Although as guitarists we distinguish between amp distortion or overdrive, and then fuzz pedals, distortion pedals and overdrive pedals, a scientist or engineer would probably class any modification of the signal as technically being 'distortion' – the names we use are more about the timbre that results from manipulating the waveform.

What distortion and overdrive pedals have in common is that they're essentially small amplifier circuits. They only differ in the amount of volume they add, and in the timbre and type of their clipping – soft or hard.

Our definition of an overdrive is simple – it’s a pedal with soft clipping of the signal it amplifies.

However, many others define an overdrive pedal as simply any pedal that seeks to emulate the sound of a tube amplifier being pushed into saturation. As with a tube amp, this is usually done by pushing the input gain past a threshold where clipping will occur.

Unlike a tube amp, however, as overdrives tend to be based around ultra-clean op-amps, the threshold has to be artificially added, and is usually in the form of diodes in the feedback loop of the op-amp. This creates what is known as soft clipping, generally considered to be the most 'amp-like' of the ways you can clip a guitar signal.

Ironically, the archetypal overdrive is the Ibanez Tube Screamer, a pedal that, when cranked, doesn't sound all that much like a tube amp. Rather, its classic tone is usually found with the gain of the pedal rolled back, and the level pushed up, in front of a tube amp.

What's actually happening is that the pedal is adding its own EQ, a pronounced 'mid bump', while boosting the tube amp into saturation. Usually, the amp's saturation is richer and more satisfying, hence why some praise of the humble Tube Screamer may be a little misplaced. If your amp is also excellent, there's a good chance that any boost with adequate gain will sound just as fantastic if it's giving your amp enough of a kick.

There is a final important point to note – that as overdrives tend to be soft clipping, you can use them more like a boost pedal with the gain down, a feature less possible with distortions that employ hard clipping, as we will see.

If you already like the sound of your tube amp but just want a little, well, more - whether that's more saturation, a fatter tone or more perceived volume - then an overdrive is probably a good bet.

As we have mentioned already, an overdrive is basically an amplifier circuit, so a lot of the time the biggest impact the pedal will have is boosting your guitar signal, and then hitting your amp's preamp hot. This is usually a function of the 'level' control. Overdrives tend to have plenty of volume on tap, but not as much clipping as a distortion.

Where have I heard overdrive?

On literally thousands of records. Perhaps the most famous Tube Screamer user was Stevie Ray Vaughan, but other users have included The Edge, Kirk Hammett, Santana and John Mayer.

When you consider all the hundreds of other overdrive designs available, it'd be quicker to list the players that don't own one somewhere – the answer is probably near zero.

Ibanez Tube Screamer
The classic models are the TS808 and the TS9, both of which have been reissued as well as extensively modded and cloned over the years. You can now also buy clones that package both circuits into a single box.

Paul Cochrane Timmy
The pick of the pack in terms of overdrives. Firmly in the family tree of the Tube Screamer, but with better EQ controls, a less compressed sound, great drive tone on its own and the ability to turn any tube amp into a rock monster. These can be pricey, but thankfully MXR has recently teamed up with Paul Cochrane to create the compact MXR Timmy mini pedal.

Hermida Audio Zendrive Overdrive Pedal
A legendary overdrive that uses 2N7000 transistors in its feedback loop rather than diodes to obtain its clipping. As a result, it has a very distinctive, musical clipping sound that tends to sound similar regardless of which amplifier you're playing into – something a little less true of the other pedals here.

Fulltone OCD V2
The OCD's rich harmonics and responsive controls make it a great overdrive for capturing that hallowed classic-rock sound of an amp pushed to 11, while its HP/LP switch affords it considerable versatility. The second generation model also features an output buffer.

For the sake of argument, we define distortion as any pedal that uses a hard clipping action to generate its clipping. This generally results in a much more square-wave, and saturated distortion sound.

Hard clipping is where - usually after the main amplification stages and before any output buffer - diodes are used to selectively pass signal to ground. Like with soft clipping, this can be done symmetrically or asymmetrically, depending on the arrangement of diodes used.

As a result, distortion pedals tend to have a dramatic effect upon your tone, and are much more of a blunt instrument than an overdrive. Where an overdrive will probably react differently to different amps, a distortion pedal's tone is one you should make sure you're happy with the timbre of, because that's what you've got to work with.

If you have a single-channel amp, then distortion can be a godsend. Run the amp loud and clean, and rely on a decent distortion to deliver the saturated high-gain tones you need.

Overdrives are relatively low-gain, and rely on a tube amp saturating to get any really high gain sounds. As a result, if you're after high gain without a tube amp, then distortion is a good bet.

Finally, as overdrives pair best with tube amps, we've often found that their drive sounds a bit lacking or flat with solid-state amps, and as a result we've tended to use pedals like the ProCo RAT with the drive low as an overdrive with a solid-state amp, rather than a 'true' drive pedal.

Where have I heard distortion?

Like overdrive, you'll have heard it over and over again. It tends to be that distortion is identifiable from the hugely saturated sound it puts out – think Nirvana's In Utero.

The thing is, because amps are able to saturate that much, it's usually hard to tell between a high-gain pedal hard clipping and a high-gain amp. Those Nirvana tones were likely a Mesa Boogie preamp, for example, rather than Kurt's BOSS DS-2.

That said, people do lean on distortion over amp gain, like death metal bands using the BOSS HM-2. It's used to legendary effect on Entombed's debut album Left Hand Path.

For a modern example, we tend to think of Young Legionnaire's Heart Attack. On the track, guitarist Paul Mullen uses a ProCo Turbo RAT to devastating effect in drop-A tuning.

BOSS DS-1
The original distortion, and many guitarists' first pedal. It's not the best around, and notably tends to suck volume, but all of the key elements are there – a hard clip, heavy saturation and the ability to annoy your parents downstairs.

ProCo RAT
The ProCo RAT beats the DS-1 in terms of age and in terms of tone. There are several great things about the RAT – it sounds ace at low gain as a dirty drive; it has a cool filter control for a tone stack; and it can push a tube amp into further saturation. Modern reissues lack one crucial feature, however – the cheap LM308 op-amp of the original. While this pedal utilises diodes for a hard clipping action, much of the clipping in the original was a nearly triangle-wave clip caused by the low slew rate of the op-amp.

Amptweaker Tight Rock Jr
One of the best modern distortion pedals on the market. Designed by James Brown - no, not that one, the one that designed the legendary Peavey 5150 - it's a compact, low-noise drive with plenty of range, and a whole kitchen sink of options, including a decent noise gate. If you need more chug, you can opt for its more metal brother, the Tight Metal Jr. If you like its general tone but want something that can do slightly more vintage and open sounds, then maybe try the Hamstead Odyssey instead.

MXR M75 Super Badass Distortion
With everything set to 12 o'clock, the Super Badass's basic voicing is tight and crunchy - firmly in the British distortion camp. There's a huge range of output on offer, too - unity volume lies at around 10 o'clock. The gain range is similarly impressive: three-quarters on the distortion knob yields a thick, chunky growl that will satisfy most genres of rock players.

Fender Pugilist Distortion
Because it’s called the Pugilist you might expect it to deliver brutal distortion, but while it can definitely do that there’s a subtler side to this pedal. This pedal offers dual gain engines (A and B) linked to a blend knob so you can have 100 percent A or B or a mix of both. This is a brilliant feature as there’s a wide variation of tone available from blending the two channels especially as each has its own adjustable gain and tone.

Like most things, which you prefer is largely down to taste. We tend to make sure we've got a couple of options on the board, with something like a Timmy set up as a boost on the one hand, and a highly saturated distortion on the other.

That said, there are some common patterns you can see from genre to genre, even if there are always exceptions to the norm.

If you're in a blues band, you're going to want a drive. Grunge? Probably a distortion of some kind. Modern metal? A distortion, with a noise gate – or the old trusty trick of overdrive with the gain down and level up, into a Peavey 5150. Folk or country? Maybe a drive set as a boost, with the gain way down. Shoegaze? Probably a fuzz. Oh yeah, did we forget to mention fuzz? Let's leave that for another day...