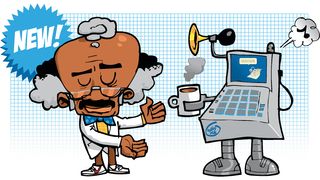 Yes, but does it still keep asking for permission to update all the time?

Computers aren't what they used to be - in fact, these days it can be hard to define exactly what a computer is. In the consumer marketplace, sales of desktop systems have been on the wane for years, with phones and tablets now many people's 'post-PC' devices of choice. Our TVs are now smart, and this year's CES even witnessed the announcement of a Wi-Fi-enabled slow cooker.

But if PCs really are yesterday's news, someone forgot to tell us computer musicians. Sure, we've embraced iOS apps and peripherals - or, at least, some of us have - but when push comes to shove, nothing beats an OS X or Windows machine (or possibly even a Linux one) running a DAW and a selection of choice plugins.

However, there are signs that the seismic shift taking place in the computing world might just be starting to impact on ours. Last month's Microsoft Build 2014 developer conference was expected to pass without incident as far as music makers were concerned, but a surprise was sprung when, during one of the presentations, a prototype Akai MPC device was shown.

With a familiar array of pads, knobs and buttons, this bore many of the hallmarks of its predecessors but was notable not only for the presence of a touchscreen, but also the fact that it was running Microsoft's Windows Embedded.

It may come as news to you that this even exists, but it transpires that the Windows Embedded family of operating systems is designed to run on (you guessed it) non-PC devices - everything from retail to medical and manufacturing products. And it seems that Microsoft may be looking to expand its reach and push it into other markets, music making being one of them.

That prototype MPC, then, can be considered a different kind of computing device (or, if you want to be cute about it, maybe a post-MPC device...). A forum leak suggested that it contains an Intel Core i5 processor and, should you decide that a touchscreen isn't enough, is capable of accommodating a mouse, keyboard and external display.

What's more, it's optimised specifically for the job at hand. It's not designed for browsing the internet, checking your email or working on documents - it's a computer that hopes to do a single thing well.

Of course, what this does mean is that - as far as we know - you can't fire up your DAW and plugins on it, either, but manufacturers of devices such as this 'Windows MPC' (and the rumour is that Akai will put something like this into production) clearly hope that there's a market for products that step back from doing everything and take us back to a time when we had specific tools for certain jobs.

The resurgence in popularity of analogue hardware synths can be seen as a reaction to the growing dominance of in-the-box solutions, and standalone music-making 'computers' might be thought of in similar terms. Sure, we've had all- in-one music-making workstations and grooveboxes for decades now, but what's intriguing about devices like the Windows MPC is that this time, they might give us something of the power and flexibility of software solutions, but with a form factor that might be more approachable and - dare we say it - more fun than a traditional computer music setup.

But while a Windows MPC might, on paper, represent a best-of-both-worlds approach to music making, it's not the only device we've seen that puts modern computer power in a different shell. Muse Research has been selling its Receptor boxes for years - these rack-mountable devices are designed to be loaded up with plugins and used in the live arena or your studio, and they've been particularly popular with touring musicians who don't like the idea of taking a laptop on stage.

But isn't this just a PC in a slightly different box? Muse would argue that it isn't, for Receptor runs a custom-built version of Linux that promises low latencies and efficient processor usage. "Windows might be a good general- purpose operating system, but Receptor is a musical instrument, not a general purpose machine," says the company on its website. "So, even though Receptor runs those same plugins that your computer runs, it runs them better and faster than a PC."

This may be true, but it's fair to say that the Receptor remains very much a niche product, and the same could be said of SM Pro Audio's V-Machine, another standalone plugin-hosting device that promised to take your plugins out of the computer.

Nonetheless, the idea that you can put the DSP in a different kind of device is one that continues to fascinate manufacturers. Roland has been talking up the 'plug-out' capabilities of its forthcoming System-1 keyboard (the theory is that you'll be able to load it up with synthesizer classics from the company's back catalogue) and, for the more experimental types, there's monome's programmable aleph 'soundcomputer' to consider.

We've also seen attempts to put a whole computer inside a controller keyboard. This concept was pioneered by Open Labs, with its Neko and Miko devices, and the baton has now been picked up by Music Computing, whose StudioBlade products come in various sizes, can use Windows or OS X, have touchscreens, and can run your favourite DAW. An in-the-box system in a different kind of box, in other words, and one that its creators claim can outperform the majority of laptop-based setups.

Ultimately, though, these devices have some way to go before they can match up to the convenience, flexibility and power that you have at your disposal when you choose a Mac- or PC-based setup. Sure, you have to keep your system up to date, and it can be a source of frustration, but we're a long way from a time when most of us would trade what we've got for anything else.

Indeed, when news of the Windows MPC broke, a lot of the comments focused on its potential downsides: rather than talking about what it might do well, many were quick to joke that it would be as crash-prone as any other PC.

What's more, while the combination of controller and computer might not be perfect, it at least means that, should you decide to upgrade your Mac or PC, you can bring your MIDI and audio hardware with you. If the computer is built into said hardware, you're stuck with the processing power you've got.

However, Apple has shown with the iPad that it is possible to create a new kind of computer platform that can be used for music making (albeit using apps that remain limited in comparison to their desktop cousins), and it would be foolish to believe that this will be the only Mac and PC alternative ever to make it to market. The ubiquitous desktop and laptop machines might continue to dominate, but there's no guarantee they'll do so forever.

This article originally appeared in issue 205 of Computer Music magazine.