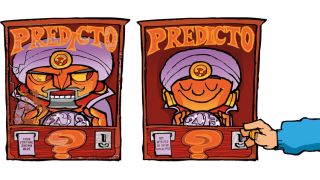 Cross our palms with silver and we'll tell you what's coming...

While it would be churlish to suggest that 2012 didn't deliver its fair share of showstopping computer music-making products - we had some cracking new releases to play with, after all - the year just past has also been something of a tease.

We've had all kinds of announcements relating to new hardware and software on both desktop and mobile platforms, but in many cases, we've been told that we won't be getting the goods until 2013.

Does this mean that the next 12 months will represent a new golden age for high-tech tunesmiths, or are we looking at more of the same? It's time, once again, to gaze into our high-definition, multitouch crystal ball…

As ever, one of the key battlegrounds will be for the hearts and minds of DAW users, which means pretty much all of us. 2012 saw some significant developments - Rack Extension support for Reason and incremental updates for Sonar and Cubase, for example - but if you look at what's coming (and what might be coming), you get the feeling that 2013 could be a year to really kick things up a notch.

For many, the most interesting face-off will be between Live 9 and the all-new Bitwig Studio, which share similar traits and should hopefully be released soon. Ableton's product should benefit from maturity and a large, loyal user base, whereas Bitwig have the advantage of being able to start from scratch and create a product that will meet the key demands of today's musicians. It'll be fascinating to see how they both fare.

Look out, too, for that long-awaited update to Logic Pro. There was a brief panic not so long ago when a couple of blogs suggested that the software may be about to be discontinued. This prompted a response from Xander Soren, who leads development of Apple's music creation applications. He said, "I want to assure you the [development] team is still in place and hard at work on the next version of Logic Pro."

Of course, this isn't quite the same as saying that we can expect the next version of Logic Pro sometime soon, but at least it's something.

Angus Hewlett of FXpansion is one man who thinks that Apple is still very much in the pro audio app game; when we asked for his 2013 predictions, he told us that "Mac Pro and Logic Pro will finally get a refresh. Possibly at the same time."

In fact, Hewlett thinks the very concept of heavyweight music-making rigs could become fashionable again: "2013 should see the return of the high-end workstation. While traditional laptops may get left behind by tablets, people will still want big iron for big jobs."

Hewlett also believes that we may start to see some features and power removed from our desktops and move 'upwards'. "People will use the cloud more and more for music production activities; even some DSP processing will happen in the cloud, especially where the 'DAW' is running on a tablet or other lightweight machine," he says.

"There still won't be a professional-grade multi-user DAW, but expect some good client-server innovations where an engineer/producer can run a fully-featured DAW server and other contributors (vocalists, for example) can run lightweight input or monitoring clients on their own equipment."

One final thought on DAW developments: now that Reason can be customised with Rack Extensions, what about a free or super-affordable 'shell' version that can then be filled with any devices you like?

Another key trend in computer music is for hybrid products; that is, ones that utilise both hardware and software. The likes of NI's Maschine MkII and Akai's MPC Renaissance made their marks in 2012, and we'd expect to see more products along these lines next year. Indeed, when you consider that Ableton is preparing to launch its new Push controller alongside Live 9, you can start to think about their platform in hybrid terms, too.

We also predict that more and more of these same companies will make further moves into the touchscreen mobile market, which remains a big growth area for the computing industry as a whole. As far as music-making goes, though, it's really been Apple or nothing so far, so is there any chance of that changing?

NanoStudio developer Matt Borstel almost certainly has it right when he claims that "iOS will continue to dominate as the mobile musician's choice over the coming year".

"Lots of marketing and development effort will be thrown at touch on the laptop/desktop format, but aside from a few breakthrough tech demonstrations, actual usefulness will be marginal."

Does this mean, though, that the likes of Microsoft's Surface won't offer a credible alternative? "Windows RT showed some promise, but it's been let down by below-par audio latency and lack of MIDI support," explains Borstel. "There are some faint rumblings that Microsoft may do something about this, but I'm not entering myself into any breath-holding competitions just yet.

"The Surface Pro [which will run the full Windows 9] is a more interesting proposition, since it will allow musicians to run their familiar desktop music software, although this may end up being of limited use for applications that were never designed with a touch interface in mind."

Angus Hewlett is similarly sceptical about the value of bringing touch functionality to our traditional applications: "Lots of marketing and development effort will be thrown at touch on the laptop/desktop format, but aside from a few breakthrough tech demonstrations, actual usefulness will be marginal," he says.

The mobile elephant in the room, of course, is Android, Google's massively popular but perennially underachieving OS (for music-making, anyway). Could 2013 finally be its year?

Fragmentation remains a big issue for developers who want to create Android music-making apps, so maybe it'll be down to bespoke hardware such as Miselu's neiro - an Android-powered device that also contains a Yamaha sound chip - to move things forward.

Could there be any other challengers in the mobile sphere, though? "I'll throw out one wildcard: RIM's BlackBerry 10," says Matt Borstel. "It's based on an OS with real-time origins, so maybe they'll do things with audio latency that Microsoft and Google can't. Everyone likes a story where the underdog wins!"

Indeed they do, but perhaps more than anything, 2013 may be about the tablet and desktop worlds moving closer together, for better or for worse. However, as Angus Hewlett points out, this is by no means a straightforward process.

"Tablets will see more rapid evolution of both hardware and software, but as their capability fast approaches that of a low-end desktop, there will have to be some difficult design decisions resulting from the compromises that make their operating systems so fresh and simple to use.

"If their designers get it right, by the end of 2013, low-end laptops/desktops will be looking somewhat undermined for day-to-day tasks, but if not, a kind of tablet-fatigue may set in as people get frustrated with their limitations."

This article originally appeared in issue 187 of Computer Music magazine.