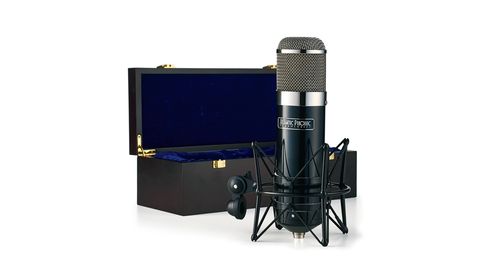 The world isn’t short of large diaphragm condensers, but the Renaissance adds quality sound to the fray, especially for vocalists.

Two things stand out about the Renaissance: firstly, it’s large, like the Telefunken/Neumann U47 it’s modelled on.

Secondly, due to its lightweight shell and the lack of an output transformer, it’s very light, quite unlike the U47. The Amphenol (Tuchel) C091 socket (instead of XLR) may also save on grams, though it makes cable replacement more tricky.

That said, we love the ‘mini-Tuchel’ (C091) as it screws into place far more satisfyingly. Its comparative lightness makes the Renaissance a doddle to mount on a standard boom stand without counterweighting.

The mic is aimed at vocal work and, whether by design or not, has a less pronounced susceptibility to plosives and sibilance. Lacking a high-pass filter, it needs to be coupled with a preamp that has one, especially as this mic works well up close and personal (ie, it has a proximity effect bass lift).

While we’re on additional controls, there is no pad, but there is a three-way polar pattern knob at the rear for omni, cardioid and figure-8. The sound of the Renaissance is based on two icons of vocal recording, the U47 and the Sony C800G, which currently cost around three and ten times (respectively) more.

The Renaissance isn’t in the boutique ‘clone’ bracket, but rather the ‘affordable alternative’ one. In its primary vocal role it works well, presenting a well balanced low mid and mid response, where clarity and thickness aren’t sacrificed for a ‘hi-fi’ scoop.

This may have something to do with the controlled high end, which keeps back from the lift many models feature. It’s not that it lacks ‘air’, but rather it keeps the top end in a more realistic balance.

Similarly, the low end seems quite flat with no lumpy regions (‘sweetspots’ to some), though this doesn’t mean it can’t rock a bass recording. The proximity effect in its cardioid and figure-8 patterns can easily be ‘played’ by a vocalist, with plenty of richness available at close range.

The Renaissance copes well with off-axis movement too, especially at the more problematic short range. This is a nice sounding mic for vocals in particular, and it performs admirably for acoustic instruments and guitar amps.

The Class A transformerless amplifier exhibits very low noise and has a hefty output; it’ll work well with a wide range of preamps. Whether related or not, there is a lower-than usual SPL handling - the Renaissance clipped well before my closest-priced condenser, (although at a far higher level than vocalists can produce).

As a vocal mic, the Renaissance is well appointed, producing results that require little adjustment before mix, though its clarity means you can pile on compression and EQ without any phase gremlins rearing up. We’re reticent about the lightness of build (we’re used to heavy mics - not necessarily a rational point), but the sound gives the Renaissance the key ingredient to stand its ground.