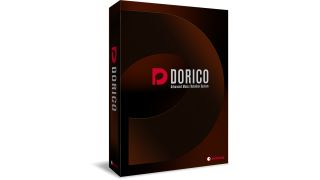 Steinberg has announced the official launch of its brand-new notation software, Dorico, which is shipping now.

The product, which has been nearly four years in the making, is said to provide the "most flexible note input and editing functionality of any scoring application."

Dorico also gives you the ability to work entirely in open meter or to freely rebar existing music, while maintaining clear and unambiguous rhythmic notation at all times.

The software includes Steinberg's audio engine and comes with a host of VST instruments and effects, including HALion Sonic SE and the entire HALion Symphonic Orchestra library.

Anthony Hughes, UI/UX designer for Dorico, said, "Music is at the heart of our design philosophy for Dorico. We wanted to build something new and powerful for musicians everywhere that has an inherent musical awareness, is intelligently organised and adapts to your personal preferences. We are extremely excited to be making Dorico available and to see what people create with it."

Steinberg's Product Marketing Manager, Daniel Spreadbury, commented: "Putting this first release into the hands of musicians worldwide is a huge moment for our team, and it's only the beginning. Dorico is already remarkably capable, and we will continue to build on its foundations to make it better and better."