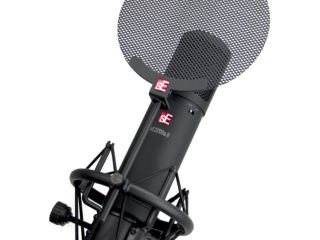 The sE2200a II: check out the black rubber finish on that.

NAMM 2012: sE Electronics has announced that it's going to be turning up at NAMM with a new version of its best-selling sE2200 condenser microphone.

The sE2200a II is a multi-pattern mic that uses a hand-crafted, 1-inch gold sputtered diaphragm that's based on the original sE2200a capsule. However, this is a 'back-to-back' version which allows for multiple polar patterns (Cardioid, Figure of 8, Omni).

The multi-pattern implementation comes in response to user requests, and it's also worth noting that the sE2200a II comes in a new custom black rubber paint finish.

The sE2200a will be shipping soon, with pricing to be announced at the NAMM show. However, you actually have the chance to win one right now, simply by adding sE to your Circles on Google+.

Find out more about this and the mic itself on the sE Electronics website.