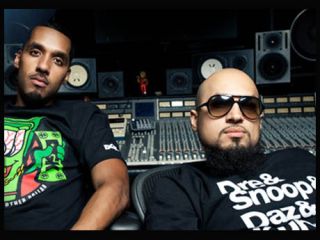 If you love the music from major hit record labels like Cash Money, Interscope and Def Jam, or the beats behind today's super stars like Lil' Wayne, Trey Songs, The Game, Mary J. Blige and Nicki Minaj, then you're going to love making beats with GrooveMaker Cool & Dre.

Straight from the source of this dynamic duo, these GrooveMaker Cool & Dre sounds will make it easy for you to cut hard-hitting records for the clubs. With GrooveMaker Cool & Dre, you'll have your choice of an extensive arsenal of basses, drums and more to choose from - imagine a palette of room rumblers, 808-style subs and a variety of 76-90 BPM style loops to pound heartbeats in the clubs. True to today's style of gritty textured hip-hop, you'll get dark synth leads, urban/ethnic percussion, and moving vocal hooks with lyrical melodies to vibe out to.

Mega-hit super music producers, Cool & Dre have been dominating the scene of hip-hop and R&B music for the last ten years, producing over 150 tracks and multiple albums for some of the hottest names in the industry. Hailing from one of the hottest cities in the US, Miami, Florida, this twice Grammy® nominated production duo - Marcello 'Cool' Valenzano and Andre 'Dre' Christopher Lyon - have been making their presence felt amongst entertainment industry heavyweights since 2001.

They've been nominated for a Grammy twice with 'The Game's' hit single 'Hate It Or Love It' featuring Mary J. Blige and another nomination for Album of the Year for Lil' Wayne's 'The Carter III'. Their music has also been heard on the Hollywood screen in such films as 'Ice Age 2', 'All About the Benjamins', and 'Bad Boys II'.

'To wake up every morning and do what you love, make music with your friends, make an impact on the world and make a living out of it is an absolute blessing.' - Cool & Dre.

After a decade of making hits, these Grammy Nominated, BMI award-winning producers are just scratching the surface of their musical genius as they continue to spread the epidemic sound of Cool & Dre. To give back to the production community, these producers started a website called www.rateyourdemo.com. The site caters to upcoming artists, songwriters and producers to network and have their music reviewed and critiqued by Cool & Dre.